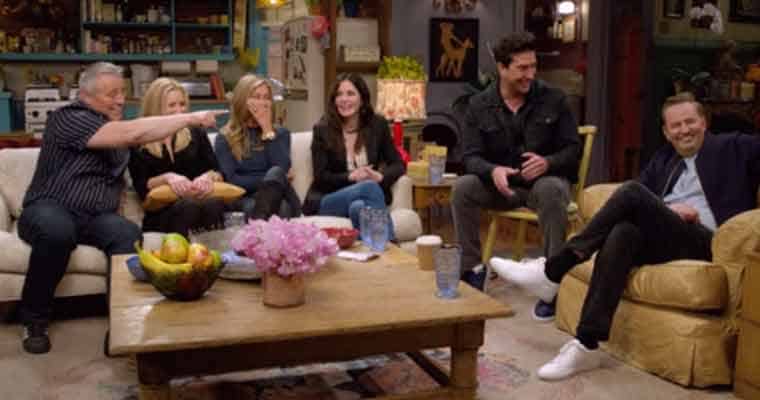 HBO Max is a major online streaming service that leaped to prominence by debuting Hollywood blockbuster films that were unable to receive theatrical distribution due to the COVID-19 outbreak.

Not only does HBO Max provide an impressive backlog of video content from their massive library, they have also created several exclusive series and specials that can only be seen on their streaming services online or via their downloadable application.

Adding to the impressive lineup offered by HBO Max is their upcoming Friends: The Reunion, which will gather all six original cast members together to recount their memories of making the hit television show on NBC in the ’90s and early 2000s.

Online entertainment betting sites have also hopped in on the action, providing Friends betting odds on a number of potential occurrences, from the utterance of catchphrases to the performance of some of Phoebe’s most famous songs.

Who Will Say “We Were On A Break” First?

The major story arc of Friends was the romantic relationship between Ross and Rachel. At one point during the series, while the fictional couple was taking some time off from their on-screen relationship, Ross decided to entertain the company of another woman.

When Rachel called out Ross on his poor decision, he yelled in retort, “we were on a break,” and that phrase was re-used throughout the remainder of the series.

The above entertainment prop bet suggests that Jennifer Aniston, the actor that played Rachel, will utter it first, but the smart money is on Schwimmer’s +130 moneyline.

Will Matt LeBlanc Say ‘How You Doin’?

Matt LeBlanc played struggling soap opera actor Joey Tribbiani, and his favorite pickup line to use on the ladies was “how you doin?” The above betting line predicts with near certainty that LeBlanc will utter Joey’s catchphrase, but a nice cash sum to the tune of 3.5x the amount risked can be won if Matt keeps it low-key during the reunion.

Will Matthew Perry Light A Cigarette During The Friends Reunion?

One of the most popular characters on Friends was Chandler Bing, played by Matthew Perry. Although Perry is extremely talented and has gone on to much success in Hollywood following the show’s conclusion, he has also had his struggles with drugs and alcohol.

The above odds suggest that Perry will not light a cigarette during the reunion, however, online sportsbook sites are suggesting that he is still experiencing personal issues by merely offering the line.

Phoebe, played by Lisa Kudrow, performed several songs during Friends’ 10 seasons, but none were more famous than “Smelly Cat,” and these entertainment betting odds suggest that a live performance during the reunion is nearly a lock.

Speaking of famous, the following two betting lines featuring odds on Brad Pitt and Paul Rudd making an appearance look slim. Rudd played Pheobe’s on-screen husband, Mike, and Pitt made a special appearance on a Thanksgiving episode while he and Jennifer Anniston were still the hottest couple on the planet.

Will Brad Pitt Make An Appearance At The Friends Reunion?

Will Paul Rudd Make An Appearance At The Reunion Show

Be sure to lay some action on these Friends odds today because the reunion drops on HBO Max tomorrow.