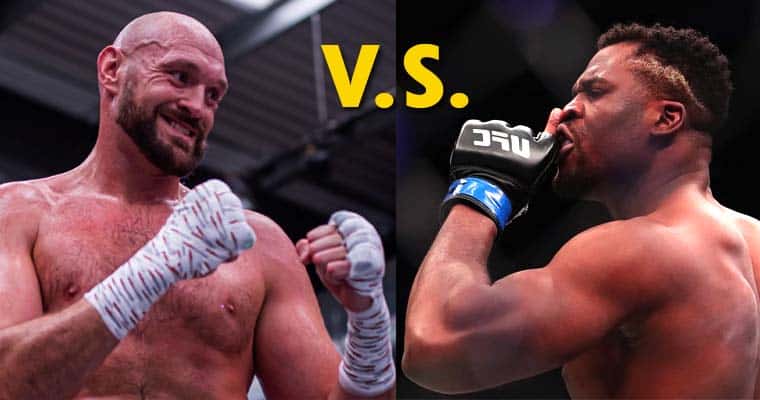 World-renowned boxer Tyson Fury dominated late April headlines with his knockout win against Dillian Whyte. The match was significant not only for the sake of maintaining a title but also for hinting at post-retirement exhibitions down the road.

Within minutes of claiming victory, Fury invited Francis Ngannou into the ring and suggested that the two fight in an ultimate world heavyweight matchup.

Odds Of A Hybrid Matchup

Such a competition would necessitate a blend of Fury and Ngannou’s specialties—a feat that has yet to be accomplished on a professional level. Nonetheless, combat fans have anticipated this event for several years.

Now that there has been a verbal confirmation, odds for Fury v Ngannou have appeared across top legal online sports betting sites. You can check out the lines below:

Tyson Fury vs Francis Ngannou – When Will The Fight Happen?

Ngannou is still recovering from a knee injury he incurred earlier this year and is unlikely to receive clearance from a medical team until January 2023. Regardless of how fast his knee heals up, Ngannou will need weeks of training before he can enter the ring.

The hype for this match could easily die down by then, as is common with most trends nowadays. Still, the Cameroon heavyweight seems optimistic that MMA betting fans can withstand the wait.

In a segment with the MMA Hour podcast, the fighter told listeners that a contest was in the works. He said:

“We both want this fight, that’s clear, and we respect each other. Probably next year it will happen. I think it’s going to happen…It’s just a matter of our promotions, but we will sort this out at some point. I would say there’s a 70 per cent chance (my next opponent) is Fury. On his side, I would say 90 percent against me.”

Ngannou’s comment about promotions is essential to this debate. Tyson Fury remains “happily retired” after his fight against Dillian Whyte and has placed an obscene price tag on any future fights.

Getting Fury Out Of Retirement

Fury addressed his Twitter followers in a video, stating that it would cost $500 million to get him back into the ring. For reference, the fighter only earned $33.6 million for knocking out Dillian Whyte in April.

Of course, negotiations could end up bringing Fury’s requested figure down to a more realistic number. This isn’t the first time Fury has announced his retirement and the fighter is still a young buck in his prime.

It is unclear whether such a matchup would generate enough revenue to justify a pay-per-view showdown. Perhaps organizers are using online boxing betting lines as a gauge for later interest.

Who knows? It might be worth putting a few bucks down on.