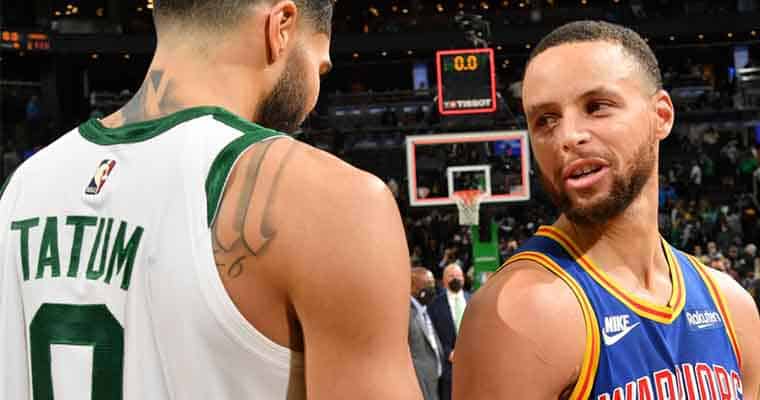 Just 24 hours ago the Golden State Warriors were favored to beat the Boston Celtics in six games at the top NBA Finals betting sites, but now that the C-Green Smash Machine has taken Game One on the road, the odds have flipped.

Boston beat the Warriors 120-108 in Game 1, swapping the homecourt advantage into the Celtics’ favor which is a large reason why they’ve overtaken the top spot in the 2022 NBA futures odds.

Game 2 of the 2022 NBA Finals begins Sunday night at 8 PM on ABC where the Warriors are projected to win and even up the best-of-seven series at one contest apiece.

Combining the over/under and the point spread for Game 2 of the Finals projects an outcome of Golden State 110, Boston 106, but consider this. NBA betting sites have already factored the results of Game 1 and their lines for Game 2 into their overall futures.

That means that even if the Warriors come through and win Sunday night’s game, they’ll still be the NBA Finals underdog and will have to also take either Game 3 or 4 in Boston’s TD Garden Arena to flip the odds.

The Celtics were listed at +4000 odds to win the 2022 NBA Finals when the preseason futures were released last fall. Now, gamblers are two weeks away from securing 40-to-1 net payouts on a Boston Championship which would be the 18th time that the Celtics have done so in franchise history.

That’s why it pays to bet NBA futures early if you have a strong hunch regarding which team will win the title. All moneyline odds for the eventual NBA champion tend to be listed in the positive unless there is an overwhelming favorite looming.

Another option for betting on the NBA Finals is presented with the following pro basketball prop that asks gamblers to predict how many games the series will last as well as who the winner will be.

If you think that Game 1 of the 2022 NBA Finals was a fluke and that the Golden State Warriors will take the remaining four games on their way to a championship, the above prop bet will deliver substantial profits to those that are brave enough to act on that belief.

A $100 bet on the Warriors to win the Finals in 5 games will earn NBA bettors a cool net payout of $1,200. Big-time earnings can be raked in by correctly choosing any of the above outcomes, but the odds will certainly shrink following the conclusion of Game 2 on Sunday night, regardless of who is victorious.

Of course, the NBA Finals odds posted above represent a tiny percentage of the overall lines, props, and other gambling options present across the board at our top legal betting sites that have earned our highest rankings. There are literally thousands of lines and odds for interested NBA bettors to search through and gamble on.

For more information about NBA Playoff betting, check out our all-inclusive guide here.