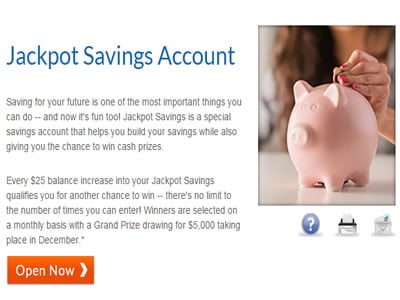 People who read the title may be wanting some of those valued ocean-front properties in Arizona, too. After all, whoever heard of a bank that offers up gambling, much less legalized gambling in the United States? That would be the first place the feds stopped things. Right? This is not the case, however, and a small bank in the town of Luray, Virginia, is taking advantage of a law that actually allows the bank to offer cash prizes to its members. And since nobody ever specified what types of cash prizes it is allowed to offer, enter the gambling.

Luray is a very unassuming town that’s based in the heart of the Appalachian Mountains in Virginia. There are 5,000 people there on a good day, maybe two traffic lights, and you’d have to drive up mountain roads on 55 to go grocery shopping or to get to a hospital, probably having to fight slow traffic at the Apple House where its four employees are busy backing out. But none of this mattered to the Blue Ridge Bank when they transformed their tiny brick building on Main Street into a gambling mecca for Luray’s residents.

The Blue Ridge Bank is the first bank in the USA to offer such forms of gambling based on the new laws allowing banks to offer cash prizes. The general gist here was that regulators decided to create a law whereby investing money became more lucrative, and thus allowing banks to incentivize investments would make investing an actual activity. The way the bank uses this, however, is in allowing a lotto-style system, so to speak, whereby the more one saves, the more opportunities they have to win real prizes. The US is a little late to the party in this regard. For nearly 70 years this has been allowed in the UK, and even South African banks have been trying this form of incentive-based banking. Finally, after a long wait, a nonprofit group named the D2D Fund is using America’s laws to promote this type of legalized gambling in American banks, starting in Luray.

President Brian Plum has worked with this bank in Luray for 35 years, and throughout its tenure he has tried many ways to make the bank, which has $260 million in assets, a more lucrative prospect to new customers and returning investors. After reading about this law change last year, he was waiting to pounce on such a system, and the end result is basically a series of games offered to investors. For instance, every month the bank selects a main $200 winner and four $50 winners, based on who deposits and invests. This prize also increases at year’s end, with a main jackpot of $5,000, and customers receive one chance to be selected for every $25 they put into their existing accounts. And in order to encourage the savings aspect of these accounts, the bank only allows one free withdrawal per month, with each additional withdrawal costing $5.

As Plum points out, the bank is “helping people do something that makes sense for them,” and in the meantime the bank in Luray is actually making it fun and potentially lucrative to choose their services. Now, this doesn’t mean that banks are going to start offering slot machines or blackjack tables. But in the USA, you can probably expect similar situations in the near future. It may become quite commonplace for banks to start offering prize drawings for customers.

The Blue Ridge Bank is very small and it, along with its sister branches, only has a total of 45 employees. This means that advertising the goings-on at the bank is tough going, but people can still hear and see all about this on Facebook. The hope is that, for the Blue Ridge Bank at least, more and more people will stop by to open up a savings account. Nationwide, this is something that could get a lot more people interested in savings accounts if more banks would start this. And with the federal laws actually allowing for it, you should expect to see similar prizes coming soon at your local banks.

If you live in the Virginia area, here is the website to Blue Ridge Bank which currently features the jackpot promotion on their homepage.