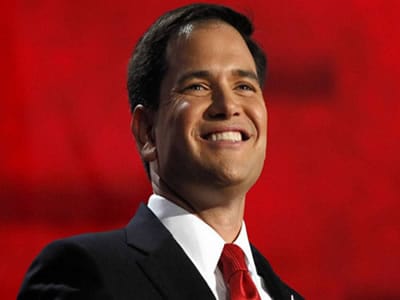 So, you’re having a discussion with a random person about gambling, when this person says, “I want to ban online gambling.” So, you scratch your head, try to process just how large a totalitarian this person is, and then you hear him say, “But not poker. That’s fine.” Now, after facepalming yourself dizzy due to this person’s objective double-think, ask yourself a simple question: Do you want this person to be America’s president? This is the dilemma fans of Republican candidate Marco Rubio have to face. The cognitive dissonance is so incredibly strong in his head that it’s shocking he can put both socks on in the morning.

Rubio, who is a Florida Senator at the present date, is co-sponsoring a bill that seeks to make legalized online gambling illegal. In other words, he wants to seek out places where online gambling is legal, and he wants to ban it. Though when speaking with the Las Vegas Review-Journal, he hinted that poker would still be okay – as if poker somehow isn’t online gambling.

According to Rubio, whose stance is eerily reminiscent of those who instituted Prohibition, poker is okay because “the poker games…[involve] an element of skill associated with it compared with just a slot machine online.” But according this the fellow backers of the bill, like South Carolina’s Lindsey Graham, poker has to go too.

In 2011, the Department of Justice correctly ruled, per the United States Constitution, that the ultimate decision in whether or not online gambling should be legal rests with the states. Since then, Delaware, New Jersey and Nevada have allowed some form of legal online gambling. However, with this new Republican bill proposed, the federal government will get to dictate, with sweeping rule, that no state is allowed to legalize online gambling.

So you know a little bit about where the majority or Republicans stand: For the last five Congressional sessions, Republican Joe Barton from Texas, a Representative, has introduced a bill to legalize online poker across the nation. However, his Republican backers to date: Basically nonexistent. But the proposal to ban online gambling across the entire nation is not only backed by more than a few Republicans, after its first passing on the floor, but it’s actually backed by two 2015 Presidential candidates. That should tell you a lot about how Republicans view gambling.

Rubio has stood against live gambling in his state of Florida, and is now standing against online gambling for all Americans in general. This will not affect a gambler’s ability to gamble legally at an offshore site. What the bill will do, if passed, is cause Nevada, New Jersey and Delaware to once again make online gambling illegal, and it will keep all over 47 states from ever legalizing it.

For some reason, this foot-shooting the Republicans constantly do is supposed to endear them to the American people for the upcoming 2016 election. But what they forget is that millions of Americans are gamblers, and gamblers vote. Rubio, a Senator is Florida, is literally seeking to impose his morality on all 50 states, along with Graham and other big-name Republicans. When they ultimately lose the Presidential nomination, one has to ask if his stance about online gambling will play a role.