Skip to content
HomeNewsAre You Ready For The Breeders Cup? 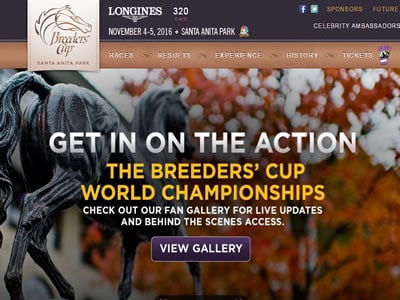 Halloween is not the only exciting event happening this weekend; the horse racing series known as the breeders cup is also slated for October 30 and 31 in 2015. This two day extravaganza is one of the most popular horse racing events each year, with attendance numbers trailing only a few other races-namely, the Kentucky Derby, the Preakness, Kentucky Oaks, and sometimes the Belmont Stakes. Representing the last real chance to prove oneself and one’s horse this racing season and offering around $26 million dollars in total prize money to be distributed among the winners of the various races, the Breeders’ Cup is undoubtedly an important event for those in the racing community.

Unlike the Kentucky Derby (which began in 1875) and many other horse races, the Breeders’ Cup is a relatively new event. It began in 1984 as a single day event run by a company known as Breeders’ Cup Limited, which was formed in 1982. The idea for the race was proposed by John Gaines, who was the heir to a large pet food fortune and the owner of several thoroughbreds; the premise behind the proposed race was that it could be an opportunity to clean up the image of the sport of horse racing.

The event’s 31 year history has been filled with dramatic finishes and magical happenings, which has led to its meteoric rise in popularity in the short amount of time that it has been in existence. In fact, the first ever Breeders’ Cup featured a nail-biting three way race-it was so close that spectators had to wait an entire 10 minutes to learn the final results. In addition to this exciting race, the original event had 6 other races and a total pot of $10 million dollars, all distributed over a one day span.

The Breeders’ Cup remained a one day event through 2006. Starting in 2007, organizers decided the event was outgrowing a single day, and it was expanded to include two straight days of racing activities. In 2015, it will feature 13 different races. As the number of races has increased, so has the amount of prize money; and as previously mentioned, the total winnings distributed to the victors will be around $26 million dollars this year.

Money is not the only reward for those who are victorious at the Breeders’ Cup. The event is known for the beautiful flower garlands awarded to each first place winner. The garlands are made by Kroger Floral Design Center, and feature many rare flowers. Some of the unique flowers included in these arrangements are Beauty Asters, Golden Asters, Cremons and Catteleya Orchids. The flowers are shaped into a blanket that can be draped over each horse that wins a race.

Winners also receive a trophy with a distinguished history. It is a bronze horse atop a rectangle base, and it is modeled after a statue originally designed by Giovanni da Bologna in Florence, Italy in the 1580s. The first Breeders’ Cup trophy was actually cast from this original statue, and each replica is carefully designed to look just as exquisite as the original.

In addition to these physical prizes, there is a less tangible but just as important prize up for grabs at the Breeders Cup-pride. This is the last big event of the North American horse racing season; for many, it is the last chance to prove oneself. It is also considered important to the Horse of the Year decision, so all the best horses and jockeys strive to do their very best here to secure their place in horse racing history.

There are several ways to enjoy the Breeders’ Cup. Of course, horse owners and jockeys from all over the United States and the world seek o qualify to compete here. A maximum of 12-14 slots are allotted for each race, so securing a place is a competitive process, and being selected to participate is an honor.

Since most of us are not professional horse racers, we are more likely to enjoy spectating rather than participating. As aforementioned, it is one of the top spectator events in horse racing, with many of the attendees betting on their favorite horses in each race. Like many other horse races, it is known for the high fashion garb worn by attendees. Like the fashion trends featured at the event, the venue changes year to year; in 2015, it will be held in one of the horse racing capitals of the world, Kentucky. Specifically, it will be held at Keeneland in Lexington, Kentucky. In years past, it has been held in places all over the United States (and once in Canada).

Of course, if you cannot make it to the race venue itself, you can enjoy watching one or many of the individual races on television, whether it is in your living room or at your local bar. While you may not get all gussied up to watch it at one of these more low key locations, you can still enjoy the exciting finishes and try to pick the winners. NBC was the first network to have broadcasting rights to the Breeders’ Cup, and it enjoyed these exclusive rights until 2005, at which time ESPN bid on and won the rights to broadcast it. In the last few years, NBC has regained the rights, so tune into your local NBC station to catch all the exciting races this year.

As aforementioned, there are 13 separate races that will be held at this year’s Breeders Cup. Four will be held on Friday, October 30, and the rest will be held on Saturday October 31. The first race is called the Juvenile Turf Race, and it will be held at 3:30 EST on Friday, October 30. This race is only for male two year old horses, and is often considered a good initiation race for future champions. The next race is the Las Vegas Dirt Mile, and is for horses three years and older. It is a mile race that is run on the dirt track; it starts at 4:10 PM EST. Next comes the Juvenile Fillies Turf; this is for two year old females and begins at 4:50 PM EST. To finish up the day, there is the Longines Distaff at 5:35 PM EST. The only purse of the day set at $2 million (the rest are $1 million), it showcases the best female horses on the dirt circuit.

Saturday is the main event boasting nine different races. The day kicks off at 12:05 PM EST with the 14 Hands Winery Juvenile Fillies. Next is the Twinspires Turf Sprint followed by the Twinspires Filly&Mare Sprint, starting at 12:45 and 1:25 PM EST respectively. At 2:10 there is the Filly&Mare Turf Race, while at 2:50 PM EST comes the Twinspires Sprint. The Mile is the next race, commencing at 3:30 PM EST. Following that is the Sentient Jet Juvenile at 4:10 PM EST; its $2 million purse is the largest prize for juveniles in the North American circuit. The penultimate race, the Longines Turf, begins at 4:50 PM EST. Finally, the day concludes with the Classic at 5:35 PM EST, which boast the largest pot of not only the day, but the entire North American circuit-$5 million dollars for the winner. The horses that race here are 3 years and older and are considered the best of the best.

Whether you are a die-hard fan who tunes into every race or a casual observer interested in watching a horse race or two, you won’t want to miss this year’s Breeders’ Cup!  If you are interested in placing a wager you can check out our our legal horse betting guide which goes into great detail about the legalities of betting horses online for American players.