Skip to content
HomeNewsNBA 2K: Will Giving Female Athletes Well-Deserved Praise Make Men Mad? You Can Bet on It. 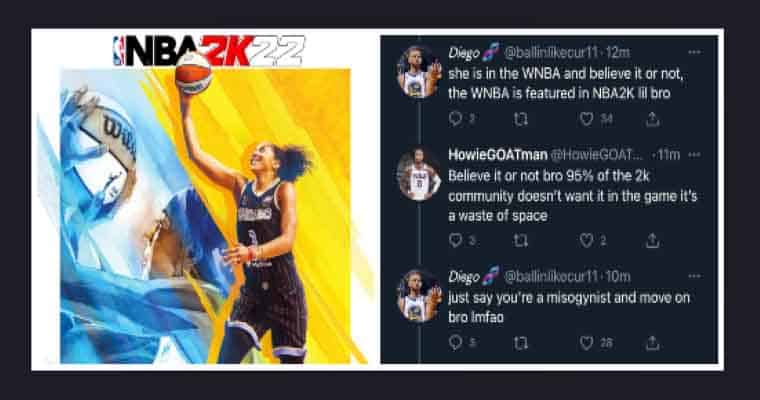 Today marked a historic moment for women’s representation in sports: Candace Parker became the first WNBA player on the cover of NBA 2K.

NBA 2K announced that they would have three covers for their new game. The primary cover features Luka Doncic,  the second being an NBA 75th anniversary cover, and the third with Candace Parker on the front.

Parker’s edition of the game will be featured as a GameStop Exclusive.

Because of 2K’s high profile in the world of Esports, Candace’s presence on the cover is a massive honor. Furthermore, the move demonstrates a shift towards engaging more women in athletic events and games.

Despite the progress signified by Parker’s cover, small circles of internet trolls and sexist sports fans have taken to heckling both the athlete and the design team behind 2K.

The Twitter thread announcing Candace’s feature on the exclusive cover is completely littered with misogynistic takes on the matter. The hate ranges from petty refusals to buy the game to people flat-out claiming that the WNBA “isn’t a sport.”

For the record: The Twitter user was right, the WNBA is a basketball league. Somehow, we do not think that is what they meant.

Regardless of the filth demonstrated on the 2K Twitter thread, this is a huge win for women in sports. This news comes just weeks after the WNBA’s Phoenix Mercury signed their first-ever deal with sports betting group, Bally’s Corporation.

The Mercury’s US$66m partnership with Bally’s is regarded as the largest team sponsorship in the history of women’s sports. This, in tandem with Candace’s 2K cover, indicates a new wave of opportunities for women in the industry.

Beyond that, these moments act as a way of engaging with a severely unacknowledged demographic of sports fans. With genuine representation for women in athletics, more sports lovers of all demographics will be inclined to keep up with and bet on these events.

The reality is that these Twitter trolls will not give up their beloved 2K for the sake of sexism. It’s hard to believe these guys actually hate women more than they love sports. And, quite frankly, there is a slew of other non-gendered reasons not to buy the new game.

The entrance of more women into the sports betting arena is a question of “when” rather than “will.” This is especially so,  given the movement towards relaxed gambling laws and legal sportsbooks in the US. You can certainly expect to see basketball betting lines expand their WNBA options in the future.

Some believe that these progressive steps are just simple pandering. While that may be partly true, it is impossible to deny that this kind of platform helps to improve the popularity and viewership in women’s sports.