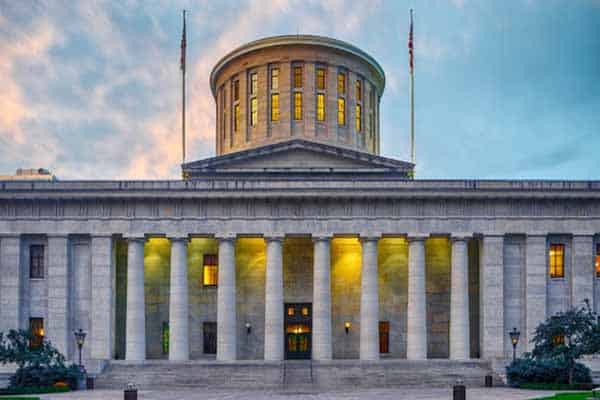 A couple of Ohio senators are introducing a bill on sports betting. The senators are bipartisan, which is a positive sign going forward. The bill is still in its infancy stage but has the framework in place to establish a legally regulated network within the state.

Senators John Eklund and Sean O’Brien are the representatives behind this ambitious Ohio sports betting bill. Eklund is actually the Chair of the Ways and Means Committee. This puts him in a solid position regarding outputting any type of legislation, particularly one that could bring some controversy. With O’Brien’s support, Eklund already has Democratic backing. This will go a long way in terms of producing more support and signatures for the bill.

As far as what the actual bill says, it is somewhat of a blank canvas. Section 1 of the bill states that “It is the intent of the General Assembly to develop and enact legislation legalizing sports wagering.” Simple, yet enough of a foundation to build upon for the future. This marks the first instance that a pro-sports Ohio gambling bill has hit the Senate floor. When asked about the legislation, Senator O’Brien said he wants to keep any new regulated betting within the existing brick-and-mortar casino and racino establishments. He is wary of allowing it in bars, restaurants, gas stations and other places like these.

Both Senators are adamant they want a bill by the end of the summer or by early fall at the latest. The Ohio legislature convenes for short sessions in August and September. They also convene for 6 days in November and December. With elections around the corner, it is unclear whether a bill will come to fruition by the end of the summer given that many politicians will be focused on reelection. However, we expect there to be something quickly after the new positions are established.

Multiple states have passed sports betting legislation and several have successfully launched their new industries. Ohio’s neighboring states of West Virginia and Pennsylvania will likely have legal betting options by the end of 2018. This puts even more pressure on local lawmakers to get the ball rolling. In the coming months, Ohio will see how these markets play out in terms of revenue, consumer protections, etc. There hasn’t been any mention of playing ball with the major sports leagues on integrity fees and data control rights, but that conversation will have to happen at some point in the near future.

On paper, Ohio is ripe for a sports betting environment. There are multiple franchises and a large fanbase that could be tapped into for betting. More than 11 million people call the state home, making Ohio one of the largest states to potentially host sports wagering. There are multiple casinos and racino locations ready to go should the necessary legislation come through. There is also an effective lottery system in place that could be used to administer betting options, however, it is unclear whether O’Brien or Eklund want to go that route.

Legal sports betting and legal online sports betting will be a hot topic in many states come 2019. Ohio looks to be another state interested in embarking on this lucrative journey. Senators O’Brien and Eklund have begun stirring the pot, now it is just a matter of getting everyone else on board and working out the logistics.