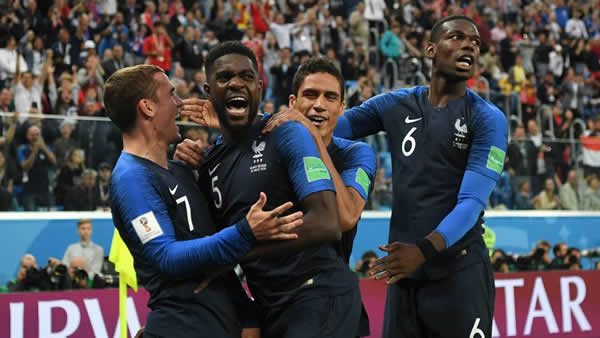 France will take on Croatia in the 2018 World Cup Final set for Sunday, July 15, at 11 a.m. EST. With the title of best in the world on the line, expect both teams to come out ready for the toughest match of their lives. Both squads are full of promise and both have been tested along their path here. Which team will come out on top?

Croatia are a team full of warriors. Each of their last 3 games has gone into extra time with Croatia equalizing towards the end of regulation. 2 of those games went to penalty shootouts, giving goalkeeper Danijel Subasic plenty of practice in case the final match goes to penalties. For the most part, it has been the same squad throughout. Luka Modric, Ivan Perisic, and Ivan Rakitic make a lethal midfield combo. In order for them to win, these players will need to stave off France’s equally elite midfield to maintain possession and create chances for the forwards.

Mario Mandzukic is the man on top for Croatia and will be sure to create problems for France’s backline. The poacher found himself in the right place during the England game to score their go-ahead goal in extra time. If Mandzukic can use his experience to time his runs and skill to collect aired crosses and shoot Croatia has a good chance of scoring.

Their defense is where they will be vulnerable. The starting lineup of Domagoj Vida, Dejan Lovren, Sime Vrsaljko and Ivan Strinic has been effective, but Strinic looked taxed in the last game. Perhaps the additional playing time is catching up to them. The defenders will be busy trying to keep up with the fast paced Kylian Mbappe and Antoine Griezmann. They’ll also have to mark striker Olivier Giroud.

France is the team to beat in this competition. They are the favorites according to the World Cup betting odds and have a talented roster of players. They subdued Belgium parking the bus after scoring. Look for France to do the same against Croatia—get the early goal and sit back in a defensive formation. That may not be enough against Croatia, the comeback kings, meaning France will have to push for a 2-0 lead in order to feel semi-comfortable.

The true battle will fall in the midfield. Paul Pogba, Blaise Matuidi, and N’Golo Kante must be on top of their game. Croatia were able to work down the wings frequently against England, so France’s midfield must be sure to condense the play to a more centralized location in order to maintain control. From there, they can service Mbappe, Griezmann, and Giroud all day long. France’s keeper, Hugo Lloris, is also in solid form. He denied multiple Belgium shots to help get France here. If the game goes to penalties, it’ll be the first time in this tournament for Lloris versus Croatia’s 2-times.

This same game played out in the 1998 World Cup Final. France won 2-1 against Croatia. Some fans expect a similar scoreline in this fixture. However, Croatia’s golden generation has been the underdog team in this tournament and they are looking to finish strong. It would certainly be a surprise for them to win, but it is hard to deny their passion and fortitude in getting here. France can’t misstep once, for if they do, Croatia will pounce and put the favorited team’s back against the wall.