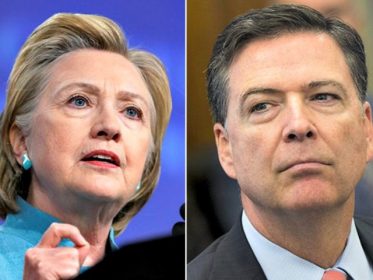 Anthony Weiner has truly proven himself to be destructive to the Democratic Party, and his latest shenanigans drive that truth home for one presidential hopeful that is slowly becoming known as Crooked Hillary. Clinton had successfully navigated the whole email scandal and FBI investigation thus far, and was getting beyond the negative press from it despite Trump’s repeated referencing of the details. It doesn’t look like she will dodge the damage from the scandal as well this time around, thanks to Anthony Weiner.

The FBI was investigating Anthony Weiner’s inappropriate and sexually explicit text messages with underage girls when some of his estranged wife’s email conversations with Hillary Clinton were discovered. The contents of Huma Abedin’s emails were enough to cause the FBI to reopen the case and take another look at the situation. Weiner is cooperating with law enforcement in what some see as a desperate act to gain leniency for his own case.

Reportedly, FBI Director James Coney was at least partially driven to reopen the case by an influx of feedback from FBI agents who were dismayed that the agency let Clinton off with only a slap on the wrist. Apparently agents were submitting letters of resignation daily as a result of how the Clinton investigation was handled, demonstrating their feelings of being betrayed by the agency and record low moral. Coney made the announcement last week to review the case again and obtained a warrant for access to Mr. Weiner’s computer.

Aside from the obvious consequences of this move by the FBI such as potential criminal charges being filed against Clinton, the investigation’s reopening has also triggered some shifting of the political betting odds as well. Simultaneous with Comey’s announcement, polls shifted to see Trump neck and neck and even a point ahead in the ABC/Washington Post poll.

Presidential betting odds also shifted, with Clinton’s lead being reduced to -275 as of this writing and Trump’s underdog position strengthening to a +190. This is a significant change from just early last week. The odds are still with Clinton overall because the Electoral College still favors her at this point. However, depending on what surfaces during the last week of this race, we could see Trump move into the favored spot and Clinton slip into underdog status. It would have to be a dramatic turn of events, but it is no longer outside the realm of possibilities.

The prominent online sportsbooks that are providing political betting lines are all reflecting pretty similar odds at this point, and everyone is watching daily to see if Trump inches closer to a favored position over Clinton. A week may not be enough to pull it off regardless of how big this scandal turns out, but its guaranteed to be interesting either way.