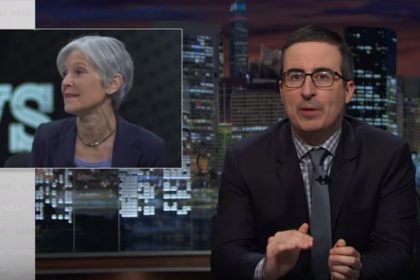 At this point in the presidential race, most people are not really taking the third party candidates very seriously. The three most known of these right now are Jill Stein of the Green Party, Gary Johnson of the Libertarian Party, and Evan McMullin who is running as an independent. While each has a small base of loyal supporters, they don’t carry much influence in the election, are not involved in debates, and fly pretty well under the radar for the most part. Popular HBO political comedian John Oliver decided to give Jill Stein and Gary Johnson their day in the sun by paying some attention to their campaigns from his perspective.

Oliver dedicated an entire 18 minute+ segment of his Last Week Tonight show to these two third party candidates. Anyone who his familiar with Oliver knows his show is a comedic approach to politics, and not really an effort to deliver a balanced message that is fair. He created a segment in which he claimed he was ‘vetting’ Stein and Johnson, and effectively did some ripping on Stein’s key issue platforms, including student loan debt and her stance on vaccinations. Here is a video that shows the entire segment:

Stein claims that the day following the airing of Oliver’s show, donations and contributions to her campaign decreased by as much as 60%. She expressed that this episode of Oliver’s show, which she claims to be a ‘deceitful attack’, caused significant damage to her campaign. While we’re willing to bet that she’s right, we can’t know for sure that simply exposing Stein’s extreme far left agenda and philosophy would irrevocably diminish her voter base. Oh wait, yes we can. Oliver ripped her plan to eliminate student debt through quantitative easing which he indicated was not an authority afforded to the President, as well as her fluctuating responses regarding vaccines and autism, implying she may support the anti-vaxxer movement.

Stein’s campaign responded to John Oliver’s attack by calling him a corrupt corporate stooge because he works for Time Warner and he is rich. According to Jill Stein, if you are rich, you are a corporate sell out. She accused Oliver and HBO of being in bed with the Clinton campaign and smearing her for the benefit of a Clinton victory. Stein went on to say that when the team at HBO reached out to her to verify context regarding some of her statements and positions, she was thrilled to provide the show with the information. However, she claims that HBO completely disregarded the information and instead deceitfully portrayed her campaign as foolish.

Whether or not John Oliver’s representation of Jill Stein was accurate or not, it is a strong example of how some negative press can turn the financial tide for a campaign, with especially devastating results for a candidate who is operating on a shoestring budget. The reported 60% reduction in donations could easily squelch a candidate’s campaign. Negative political satire that influences the voting public can have a bearing on betting odds as well. However Jill Stein hasn’t made much of a splash in political betting circles and isn’t even included in most online sportsbooks political betting lines. That being the case, we aren’t seeing much interest in following the odds on her becoming president. Most individuals who are interested in betting on politics are following the odds on Trump and Clinton.