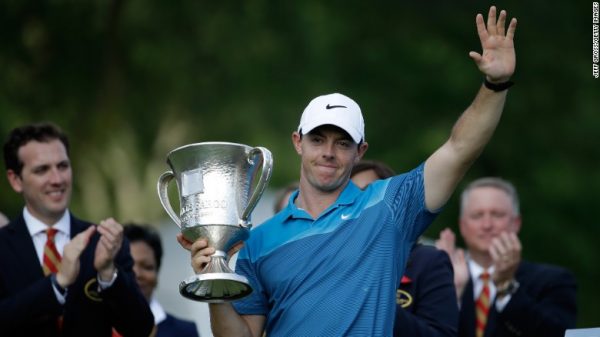 The 99th annual PGA Championship is right around the corner and there is a lot of fierce competition, but one player is being touted as the heavy favorite—Rory McIlroy. The Championship is set for August 10, and will be held at the Quail Hollow course in Charlotte, NC. With heavyweights like Jordan Spieth, Dustin Johnson, Hideki Matsuyama and Rickie Fowler in the mix, what sets McIlroy so far apart in terms of betting?

McIlroy’s success at Quail Hollow is likely a huge factor in most oddsmakers’ projections, driving current betting lines for golf. McIlroy has won two competitions at the course and even holds the course record. He did lose in a playoff round to Rickie Fowler one year, but has seen enough top-10 finishes at the park to make him feel at home. While Spieth may have just won the Open Championship, even he could not deny that McIlroy is the person to beat this PGA Championship. At the most recent tournament, the WGC-Bridgestone Invitational, Spieth finished T13 while McIlroy finished T5.

Despite Spieth’s praise, there is no denying that Spieth is currently playing the best golf of his life. After winning the Open, Spieth is looking for the career Grand Slam with a victory at the PGA Championship. The young player is being compared to Jack Nicklaus at the pace he is moving up the golf leaderboards. However, McIlroy is looking to etch himself into history as well by joining Tiger Woods, Jack Nicklaus and Bobby Jones in reaching five majors before turning 30.

The headlines may be focusing on Spieth and McIlroy, but this year’s championship is stacked with talent. Dustin Johnson could easily win his second major. Rickie Fowler and Justin Thomas are in consideration to win their first major. There are too many potential storylines that could come out of this year’s tournament. This makes for an incredible golf showcase for fans, but can be a tad frustrating for bettors.

From a betting standpoint, Spieth is the hot hand. His recent performances have put showed he can handle the pressure of competing at the top level at such a young age. This composure is a strong quality when considering who to bet on. Golf betting is a little trickier than most other sports because anyone can have an off or one day. Not to mention the extraneous factors like course conditions, club selection and more. This is why McIlroy is considered the favorite—his experience. Each golf course is different, and for a player to have such success at one particular course is not something to be taken lightly. McIlroy has got to be feeling pretty comfortable heading into the Championship. If Spieth has already mentioned him as the favorite, it is possible that McIlroy has already won on the mental front. One interesting factor to consider is that McIlroy recently changed caddies, which could have a slight effect on his overall performance. McIlroy is still the most solid bet to make overall.