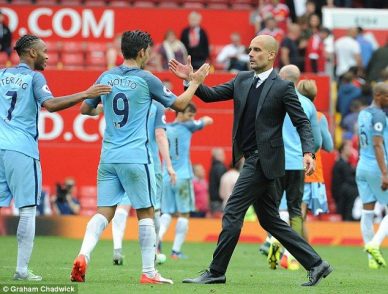 The second and final Manchester Derby (also known as the Manchester Darby overseas) is set for this Thursday, April 27, at the City of Manchester Stadium. Oddsmakers have Manchester City as the favorites to win at -118 odds, but Manchester United are not far off. United has been in form recently, causing some bettors to lean towards them.

As things stand now, City is ahead in the Premier League Table at 4th place, but United are only point off. 4th place is one of the most coveted rankings in the Premiership, as it is the last Champions League spot available at the end of the season. City saw their Champions League exit thanks to France’s Monaco in the Round of 16, and United missed the Champions League after failing to qualify last season. There is no denying this game as a pivotal one, with the table shifting at the end whistle. 3rd place Liverpool are only two points atop City and three off United.

Both teams have an array of star players, but it is United going into the match at a disadvantage. They just lost star forward Zlatan Ibrahimovic for the rest of the season during the Europa League tie against Anderlecht. Center back Marcos Rojo also fell to injury, leaving Manager Jose Mourinho to make some serious tactical decisions. The emphasis should be on defense, seeing as they lost one of their true defenders. Mourinho will likely put Daley Blind into the lineup, but Blind isn’t a natural central defender and has proven to be a liability at that position.

For offense, United can look to club legend Wayne Rooney, who has spent much of the season on the bench, or young talent Marcus Rashford. The latter seems the more likely of the two, as Mourinho will favor Rashford’s pace and form over Rooney’s experience (even though Rooney scored last weekend). There will be plenty of pressure on midfielder Paul Pogba, who holds the record for the world’s most expensive player, so much attention will be on him during the match. Anthony Martial played in United’s last fixture and scored the first goal, so odds are Mourinho will place him in the starting XI again.

City have less to worry about as most of their team is available. Despite losing to Arsenal last weekend, City has a strong team. Forward Sergio Aguero is lethal up top and they have plenty of other attacking options in Kevin De Bruyne, Leroy Sane, Raheem Sterling and David Silva. City’s biggest liability is also their defense, which could be exposed with the pace and youthfulness of United’s attack. Defenders John Stones, Vincent Kompany and Nicolas Otamendi will have their hands full all afternoon.

You can find betting lines for the year’s last Manchester Derby fixture through licensed many of the legal US online sportsbooks we recommend here. There are different wagering types including point spread bets and over/under bets for your consideration. City won the first Darby 2-1 back in September, so United will be looking to capitalize on their recent form in their quest for redemption.  You can access the current odds through the options available in our soccer section.