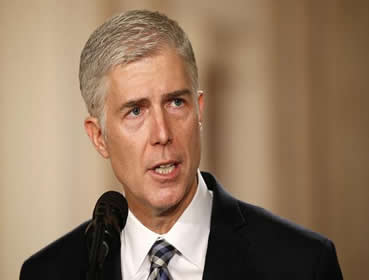 Neil Gorsuch was recently sworn in as the Associate Justice of the Supreme Court of the United States and his appointment is an enticing prospect for pro-sports betting enthusiasts. Gorsuch was President Trump’s nomination and will succeed Justice Antonin Scalia. He assumed his office as of April 10, 2017.

Gorsuch is a Republican and more importantly a stout Constitutionalist. At 49 years old, Gorsuch looks poised to be in the position for many years barring any unforeseen circumstances. The newly appointed Justice is known for putting the Constitution before his personal viewpoints, a principle you would hope any Justice would follow, but nevertheless, one that could payoff for the gambling community.

As it stands now, sports betting is overruled by a federal ban known as the Professional and Amateur Sports Protection Act, or PASPA. This law was passed in 1992 in an effort to stop the spread of legalized sports betting. The ban affects 46 states with only Nevada, Oregon, Delaware and Montana exempted. These four states were exempted because they already had some form of state-sponsored sports betting in place at the time of the bill’s passing. Out of these four states, only Nevada has fully-fledged sports betting in the form of brick-and-mortar sportsbooks. Several states have drafted legislation that would authorize a state-regulated sports betting market, but nothing significant can happen until PASPA is repealed.

Enter New Jersey. New Jersey has been leading the charge against PASPA by passing a law that allowed for sports betting in their licensed casinos and racetracks back in 2012. Their decision was met with swift action from the NCAA, NFL, NBA, MLB and NHL in the form of a lawsuit. New Jersey’s progress was stifled and they were left fishing for appeals.

After being denied several times, the state petitioned to the Supreme Court. The Supreme Court then asked the Solicitor General to weigh in, but the situation has been delayed with President Trump settling into his new role and selecting appointments. The acting Solicitor General invited representatives from both parties to meet in early April to discuss the issue. The Solicitor General is expected to draft a brief that will influence the Supreme Court’s decision to hear the case. If the whole ordeal sounds convoluted and stretched out, that’s because it is. The major professional sports leagues have come a long way in terms of their stance on sports betting, however the NCAA remains vigilant in their opposition. Gorsuch has the power to influence this process by directly stepping in and dealing with the case himself.

New Jersey has two main arguments with this case. The first is that they see PASPA as an unfair standard in that it exempts four states while banning 46 others. Their second argument calls on the 10th Amendment, which states that, “The powers not delegated to the United States by the Constitution, nor prohibited by it to the states, are reserved to the states respectively, or to the people.” This basically means that anything not covered in the Constitution is left to the states’ discretion. Since sports betting isn’t mentioned in the Constitution, New Jersey believes their 10th Amendment right is being violated. NJ government doesn’t see how the federal government can make the decision of having or not having a regulated sports betting market for them.

The line of thinking that is so appealing to those in favor of legalized sports betting is that Gorsuch, a staunch Constitutionalist, will see things the same way. If this is the case, New Jersey’s chances of having a successful regulated sports betting industry will improve drastically. Regardless of what Gorsuch personally feels on the matter, there is no denying the text of the Constitution and how it plays into this situation. Gorsuch will likely see no other option than to honor the Constitution’s ruling and leave the decision up to states. This will open the floodgates, starting with New Jersey, for states trying to host sports gambling. The number of states filing legislation that would allow for sports betting is increasing slowly but surely. If New Jersey’s case is ruled in their favor, whether by the Supreme Court or Justice Gorsuch himself, the sports gambling industry will begin to take off in the United States.