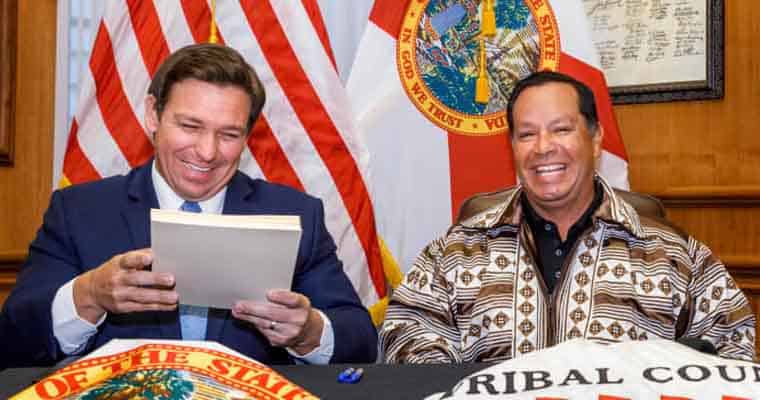 Several gambling entities in Florida have been bold in their challenge of the Seminole Tribe. Despite overwhelming approval of Florida’s gaming compact, commercial entertainment groups and parimutuels have banded together to file multiple lawsuits against the state.

The filings describe a widespread attempt to invalidate the state’s newly signed gambling legislation. However, this action is shortsighted as Florida lawmakers have already announced plans to commence legal betting on October 15th.

In the lawsuits, claims of monopoly and irreparable damage are thrown around quite loosely. While online sports betting will be restricted to Seminole servers, local gaming hubs will be allowed to partner with the Tribe to get a slice of the pie.

Nonetheless, these parimutuels have been very vocal in that they want the whole pie or nothing at all. Not only do these lawsuits request that the courts revisit the gaming compact, but they also suggest legal sportsbook operations in the state be halted altogether.

These lawsuits aren’t exactly breaking news, having been filed with little to no movement since. However, the Seminole Tribe just made their claims in court, affirming their legal rights in the state.

The Seminole Tribe came down like a hammer and completely dismissed the claims made by their opposers. In documents filed with courts in Washington D.C. on Tuesday, the tribe claimed that as a sovereign nation they are immune to the case.

Their argument is based on a legal technicality, but one that works in their favor. As a federally designated sovereign nation, the Seminole Tribe is unable to defend itself in court.

Because the ability to defend oneself is critical to the function of the US justice system, the Seminole Tribe expects the case to be swiftly dismissed. However, no conclusion has been met by the federal courts.

Nonetheless, it will take a lot to get the state of Florida to miss out on $2.5 billion in tax revenue. Additionally, the state will have to dedicate time and taxpayer money to renegotiating the gaming compact.

Will Of the Seminole

Honestly, we are impressed by the grit being demonstrated by the Seminole Tribe. The Tribe has proven that they won’t stand for slanderous suits or mistreatment by the state.

The whole reason that the gaming compact was rewritten was that the state had violated conditions outlined in the earlier document. As a result, the Seminoles withheld gaming tax revenue for two years. And rightfully so.

These lawsuits will be resolved soon enough. Florida already has federal approval to start allowing legal bets in just over a month. Check out our site for more information on legal online gambling in Florida.