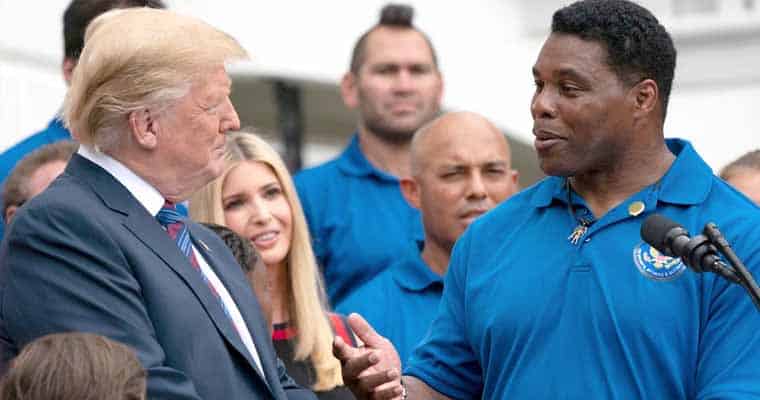 The announcement is surprising to many, although Herschel Walker was already listed as a potential candidate on multiple GA betting lines for months.

However, Walker only recently moved to Georgia, registering to vote in the state just a week ago. Some speculate that former President Donald Trump gave the former running back the courage to run.

“I think he will [run for Senate]…He’s a great guy. He’s a patriot. And he’s a very loyal person, he’s a very strong person. They love him in Georgia, I’ll tell you.”

Does Herschel Walker have a shot at the Senate? Frankly, yes.

Great Odds for The NFL Star

While younger football fans may be less familiar with Walker’s legacy, older Georgia natives know him as the pride of their state. He began his football career at the University of Georgia, where he would take home the 82’ Heisman Trophy and several other decorations.

Such titles made Walker a household name, many deeming him as the greatest college football player of all time. His later notoriety was based on his time in Texas playing for the Dallas Cowboys.

Despite Georgia’s flip to a blue state, Herschel Walker’s name recognition and Trump-backing make him a formidable frontrunner in the Republican Primary and a potential winner in the midterm elections.

Political betting props haven’t quite caught up to the news, with Walker at +3300 on the Georgia Primary betting lines.

Nonetheless, candidacy alone does not secure a win— no matter what kind of fame is carried by the name. Herschel Walker has no political experience, even in local government. A senate seat comes with great responsibilities that Walker may find himself unprepared for.

Walker also has his transparency going against him. The microscope under which every political candidate is subject to be put under will reveal and vilify the former athlete’s greatest pitfalls. Among these will inevitably be Walker’s dissociative identity disorder, an issue he has already been open with.

If Herschel Walker moves forward with this campaign, he won’t be the first. Retired athletes have often fixed their sights on civic duty for several years.

Ex-body builder Arnold Schwarzenegger went on to become the Governor of California for a brief stint. Former NFL Player Burgess Owens took on a seat in the US House of Representatives just this year.

That said, to be a former athlete turned politician is not an impossible or even uncommon feat. And with the announcement coming just before football season, it is a perfect time for NFL bettors to set their sights on political props.