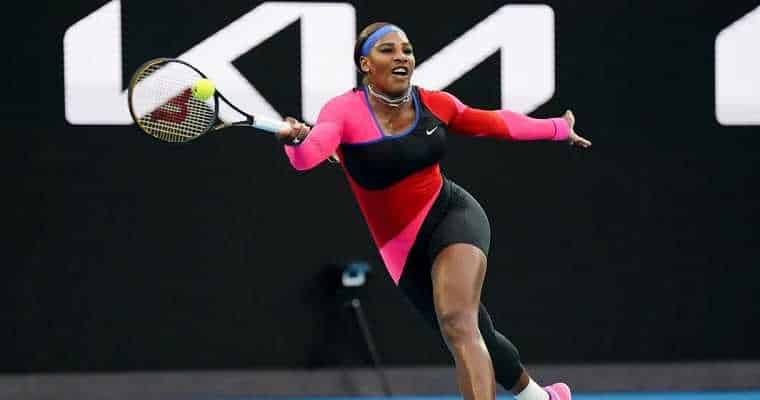 Tonight at 7:00 PM EDT on ESPN, women’s pro tennis legend Serena Williams will attempt to get beyond Naomi Osaka in the Australian Open semifinals and capture her 24th Grand Slam Championship.

Adding another Grand Slam trophy to her shelf will tie Williams for the all-time mark of 24 that is currently held by Margaret Court who dominated the sport of women’s tennis throughout the 1960s and into the mid-1970s.

The following tennis betting odds for tonight’s semifinal match between Williams and Osaka imply that Serena will not move on to face the winner of Jennifer Brady and Karolina Muchova in the 2021 Australian Open Final.

However, the following Australian Open futures line suggests that the winner of tonight’s semifinal match will go on to win the entire tournament, placing Osaka and Williams with the highest potential of earning the championship out of the final four female players remaining.

It is inevitable that either Muchova or Brady will take part in the Australian Open Final, so bettors may want to consider laying some action on either of their money line odds because there is the potential to earn a multiple of five to nine times the amount risked.

Regardless of whether Serena is able to capture her eighth Australian Open title, her Wimbledon odds are incredibly favorable, with futures lines at Bovada currently listing her in a four-way tie for first place among all the potential female competitors.

The grass courts at Wimbledon favor players with powerful serves, and Williams is inarguably one of the strongest female tennis players of all time.

Although not as young and agile as she once was, Williams still packs plenty of punch in her serves and return strokes, and England’s grass surface allows her power to make up for her declining speed.

Serena Williams has won Wimbledon 7 times, and bettors can get in on her +700 odds now and cash in to the tune of $7 per each $1 wagered when she ties, or breaks the record for most Grand Slam titles this summer.

Although Williams has very high odds of winning Wimbledon, she is on the cusp of winning the 2021 Australian Open, and faces the most difficult opponent remaining in the field tonight.

That means she’ll face a weaker opponent in the final, and can then start to set her sights on breaking the record this summer in England, not tying it.

Serena’s greatness will not be determined by tonight’s match, or any other match that occurs during the remainder of her career. Her legendary status in the realm of professional tennis, nay, professional athletics, is etched in granite already.

Whether or not you plan to lay any action on the Australian Open at one of the best online tennis betting sites, do not miss tonight’s semifinal match between Serena Williams and Naomi Osaka on ESPN. Tune in and witness this significant moment in pro sports history as it occurs.