Options for legally betting on Wimbledon matches and players has opened up a whole new realm of betting entertainment for tennis enthusiasts. At this point in time, the only legally sanction opportunities for wagering on the Wimbledon tournament in the United States are found in Las Vegas. There are a few additional US destinations offering limited, state regulated sports betting activity, such as Delaware but they typically do not include tennis events. This page will take a look at the legality of betting on tennis events such as Wimbledon in the US, and what options remain for American bettors to engage in this type of responsible wagering entertainment. Our objective is to provide you with valuable data for making an informed decision regarding your level of involvement with betting on the Daytona 500 race. We want you to provide a resource that allows you to really understand the legalities involved with this type of entertainment to comfortably make a decision that is best for you concerning your participation.

The 2020 Wimbledon tournament is scheduled to take place form June 29-July 12. As such, no announcement of postponement or cancellation due to COVID-19 has yet been made. Stay tuned for more information as the tourney date gets closer. In the meantime, since most tennis and tennis betting is currently suspended, you can play casino games, slots, poker, and even bet on virtual tennis at sites like Bovada.

Is It Legal To Bet On Tennis Matches In The US?

Legal US online sports betting in general is extremely limited. The reason that regulated options for betting on sports is so limited in the United States is due to two specific US federal laws: the Federal Wire Act and the Professional and Amateur Sports Protection Act (PASPA). These two gambling laws combine to prohibit online and offline USA based sports betting with the exception of four regions that were exempted from PASPA. Those regions include Nevada, Delaware, Montana and Oregon. Sadly, from among those destinations, Nevada is the only one really offering much in the way of sports betting options. Delaware offers limited NFL parlay lottery style sports betting. New Jersey has moved forward with a bill that legalizes sports betting for its residents and visitors, but since NJ is not exempted from PASPA, we're all watching to see how the feds respond. While US based Wimbledon betting options may be extremely limited and hard to access, there are some legally sanctioned destinations which are licensed, regulated and located outside of the United States.

Another law often brought up concerning online sports betting is the UIGEA bill. This law does not prohibit or even address player participation when it comes to online gambling. What the law does accomplish is placing regulatory oversight and restrictions regarding how online gambling related transactions can be processed. This has resulted in a safer environment for both online sportsbook operators and its customers, but it does not make it illegal for US gamblers to engage in online gambling, including betting on Wimbledon online.

There are not any US federal laws that prohibit US players from betting on tennis tournaments such as Wimbledon through legally licensed offshore sportsbooks. The key to remaining on the legal side of sports betting is to restrict your wagering action to only licensed and certified destinations that are subject to regulatory oversight through a respected and legitimate governing jurisdiction. The sites you see listed in this guide have been verified to hold legal licensing and compliance certifications issued and regulated by leading regional gaming commissions. Along with offering a legal betting environment, these sites also provide the most competitive and highest quality betting services that include Wimbledon betting lines. We have a team of professionals that evaluates the many online sports betting sites, providing expert input based on over decades of combined experience in the industry. You can rest assured that the information you find here is accurate and based on a wide range of criteria that determines whether or not a site is qualified to be included in our guide. 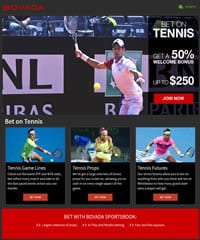 Bovada is by far the most popular online sportsbook that currently accepts USA players. They offer lines on every major sporting event including Wimbledon tennis matches. If playing with a reputable sportsbook is important to you, then we highly recommend you signing up an account at Bovada. Below are a few reasons why players love betting here.

The oldest tennis tournament in the world, Wimbledon is an annual tournament that takes place in England over roughly a two-week period. Like the US Open, there are 24 rounds of tennis in total in this tournament, with 7 each for men's and women's singles matches, and 6 for adult doubles (men's, women's, mixed). And there are even rounds played for boys' and girls' matches, singles and doubles. Many claim Wimbledon as the Olympics of Tennis that just so happens to take place every summer. Even in America, where tennis isn't a big-three sport, Wimbledon still takes precedence over normal programming and is shown on the main ESPN channel.

As one might imagine, this tournament brings with it a lot of betting. Before putting your money down on the game, however, it might help to seek out some different tips on the topic.

Tips for Betting on the Wimbledon Tennis Tournament

32 players from each main singles category will be seeded in the opening rounds of Wimbledon according to their international rankings, with 16 teams being formed typically through the field of singles. Now, it's a little unrealistic that you'd become an expert on all 64 men's and women's singles players, but you can look at the top rankings. And a great tip to use here is to wait 'til at least the quarters before you start betting. Attempting to bet on the wider field is more difficult, unless you're really a tennis fan who keeps up with the players. It's best to research and follow the top players who thin the field out.

You're also going to need to find a good sportsbook. You should look for a book that gives you plenty of betting options. For instance, you may end up wanting to bet on more than a common spread. You might want to bet individual sets, match times, or even straight-up even wins, if you can find evenly matched players in a bout.

3: Bet Only on What you Feel Comfortable

After finding a good sportsbook with which to bet, you may be tempted to participate in a lot of props bets or a lot of action in general. But you should stick with what you feel most comfortable betting. For instance, if you're a big fan of women's singles, then stick with this branch and don't worry about men's matches or doubles. Unfamiliar betting is losing betting.

Every gambler has faced a bet that they thought was a surefire win. Regardless of the odds, you just know X is going to win the match! It's a lock. This is something every gambler deals with, but few deal with correctly. Often is the case that the "lock" ends up being a flop, and a lot of money is lost. So never over-extend yourself on bets. Bet reasonably and responsibly on all bets, and don't chase wins.

You also must stay realistic. Tennis matches are played by human beings, and so logic follows. Players need to be healthy and strong. And barring something like a legitimate injury, the odds of a 30s-ranked player beating the #1 player are incredibly slim. Not impossible, but certainly not realistic enough for you to chase a huge payday with a bet. Stay realistic when betting tennis and don't treat the event like a way to instantly change your fortunes.

Wimbledon is a very popular, very exciting event. Particularly if you're a gambler, you may find a lot to keep you interested. Just bet responsibly and with some sense, and you should do just fine.

Promising Wimbledon Players to Take the Win in 2017

There are two players on the men's singles side expected to do very well in this year's Wimbledon: Andy Murray and Novak Djokovic. Murray, who is now recovered from an injury, is already on a tear this year, and Novak is actually the successor of Nadal and Federer, currently ranked #1 and expected to keep winning. However, it's also too soon to rule Federer out. He shows up big in big matches, and a Wimbledon win might just be his swan song.

On the women's singles side, it boils down to two players as well: Serena Williams and Maria Sharapova, ranked #1 and 2 respectively. Serena has owned Maria in head-to-head match-ups, with 19 Grand Slam title wins and is ahead 17-2 in head-to-head matches. Serena is the heavy favorite in the field, but Caroline Wozniacki, all the way back at #5, is a dark horse in the tournament.

With Serena's dominance of tennis, many forget that Venus is also a great player. In a match for the ages, in 2005, Venus Williams met Lindsay Davenport in the finals. Davenport won the first set, even though it was highly contested. And looking as if she was going to win the second, Venus mounted a fantastic comeback and stole the second set. Venus would ultimately go on to win in three sets, en route to five Wimbledon titles in total, but this match became an instant classic.

A Passing of the Torch

In 2008, Roger Federer was already considered the greatest tennis player ever, and Rafael Nadal was simply an up and comer who couldn't face Federer's game anywhere but a clay court. Nadal would change this, however, en route to playing one of the greatest tennis matches ever witnessed. In a five-set match that was packed with hours of nonstop action, Nadal won his first Wimbledon title and knocked Federer off the top spot.

Bjorn Borg was famous for dueling with John McEnroe for years, but perhaps his most famous win was over Vitas Gerulaitis in 1977's Wimbledon semi. In a five-set match that felt like it would go on forever, Bjorn was giving everything he had only to watch Vitas counter. Eventually, however, Borg would emerge triumphant and go on to defeat Jimmy Connors in five sets. This is memorable because it's a rare time when a semi match was actually considered superior to a finals match.

Wimbledon has had many great moments, and there will be many more to come. When betting on tennis, however, don't focus on the majesty of the matches. Stay grounded and logical in your betting.