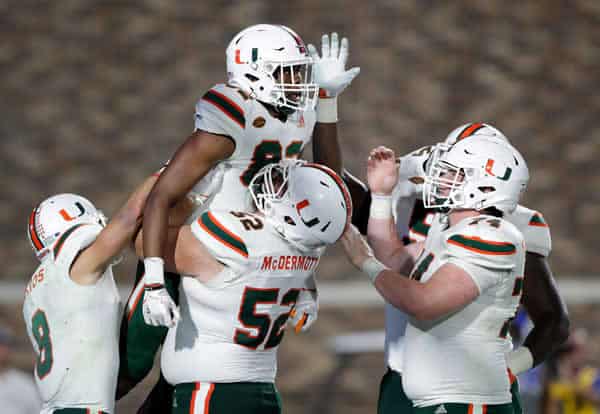 The NCAA College Football Playoff bracket looks a little different after this year’s Thanksgiving football games. Thanksgiving is reserved for the best rivalry games in the country, and with the season at its end, it is the last chance for teams outside of the conference championships to make a push for a shot at the national championship. From a betting standpoint, this new playoff picture shakes things up a bit.

The first top 4 team to lose was the University of Miami. The Hurricanes were enjoying their best season in a while, going undefeated and securing a spot in the ACC Championship game. All they needed to do was get past unranked Pittsburgh and they would retain their spot in the CFP—given they beat Clemson in the ACC. However, things did not go according to plan. Miami lost by 10 points and could not get their offense going. They even tried switching QBs, but consistent 3-and-outs were all they could muster until a late touchdown in the fourth. The Canes managed to secure an onside kick, but then turned the ball over a few plays later. For Miami, who have narrowly escaped several defeats this season, this loss confirmed their absence from the CFP. A loss to an unranked team at this point in the season is a death sentence.

Alabama was on top of the AP Poll heading into the weekend. Despite being limited with injuries in key areas, the Crimson Tide managed to stay unbeaten. Some believe they had a weaker schedule, and that notion was somewhat proven after their loss to Auburn. Auburn’s season has been fantastic—they dethroned the Georgia Bulldogs when they were #1 and they just dethroned another #1 team in the Crimson Tide. Their decisive 26-14 win over Alabama was enough to knock them out of the top 4, something that hasn’t happened in some time. After the victory, Auburn leapfrogged Bama to take the #4 spot, while Bama dropped from #1 to #5. Auburn has emerged as a popular option in legal online sportsbooks for US residents.

The other 2 teams in the top 4 did what they were expected to, with Clemson and Oklahoma both winning their rivalry matchups. Clemson looked strong against USC and Oklahoma showed why they are the best offense in the country by putting up 59 against West Virginia. If both these teams can win their conference championship games, expect them to be in the semifinals.

Conference championships are the only way some of these outside teams can get in. Miami’s only chance to get back in the good graces of the Selection Committee is with a win over Clemson in the ACC Championship. If they can pull off the upset, they will likely be back in. If Georgia beats Auburn in the SEC Championship, they will likely be in. Georgia will be itching for a chance to redeem themselves after Auburn knocked them down earlier this year. If Ohio State can beat Wisconsin in the Big 10 Conference, they could break into the top 4. If TCU beats Oklahoma, they could also make a push for the CFP, but Oklahoma has looked unstoppable throughout the season.

Check out the online sportsbooks for betting lines on these games. US gambling laws permit offshore sportsbooks as long as they are legally licensed and regulated. All the conference games are taking place this weekend, so you have the remainder of the week to make your picks.