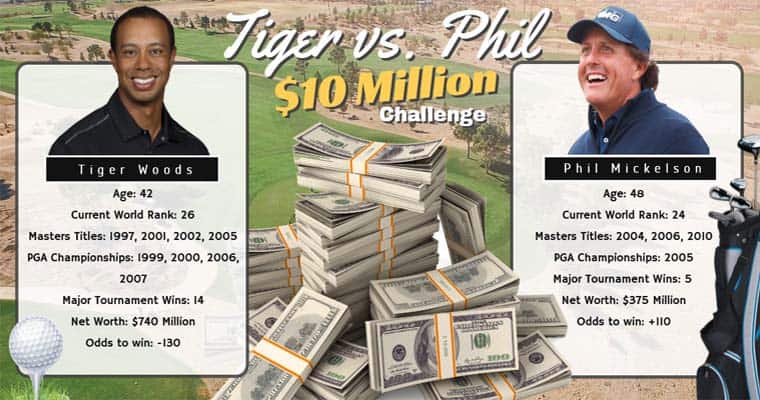 Anticipation grows for golf fans as Thanksgiving Weekend nears, Tiger Woods and Phil Mickelson are to compete head-to-head in Las Vegas for a grand prize of $9 million and pride.

Tiger Woods was quick to challenge Phil Mickelson over Twitter to a 10 million dollar match-play. However, PGA objected against the prize amount by stating such an amount was solely reserved for PGA Tour’s FedEx Cup Playoff winners. The two golfers then settled on reducing the prize by one million dollars and offered to ante-up their own money for the pot and the winner’s check to be donated to a select charity of choice by the match winner.

By career result, Tiger Woods is favored due to his 79 tour wins and 14 major title wins while Phil Mickelson has significantly fewer tour wins, 43, and only 5 major title wins. This lean toward Woods becomes more evident as we compare the recent tournament performances of each golfer. Mickelson missed this year’s final major cut and has not maintained a top-ten showing since May’s Wells Fargo Championship, on the other hand, Woods finished 2nd during the PGA Championship at Bellerive and was recorded in the top-five results at both the Quicken Loans National and the British Open.

A number of sportsbooks have caught wind of the event and have offered golf betting odds, most favor Woods over Mickelson but not by a large margin. While Woods may have performed better than Mickelson in recent tournaments, odds can quickly change, and so can Mickelson’s performance. Nonetheless, if current trends concerning performance and form persist sportsbooks will maintain Woods as the favorite to win with Mickelson riding as the underdog.

Phil Mickelson is a gambler himself and no doubt is enjoying the various aspects of the match bookies and bettors are attempting to gamble over from simple prop bets such as what color shirt each golfer will wear to prop bets for individual holes and so on. While these two professional golfers are much older now then when they first faced one another on the green, the rivalry is just as fiery giving bettors plenty of reason to act.

This once in a lifetime faceoff is expected to not only revive golfing for younger audiences but to also rejuvenate life back into the sport during a period of golfing activity lulls. The showdown is said to bring about a more interactive format than usually experienced by fans due to the scheduled match’s intimate environment and focus on the two athletes. The golfers themselves have even told fans to expect each golfer and their caddies to wear microphones so they may hear the chatter, banter, and conversations otherwise omitted from traditionally televised golf tournaments.