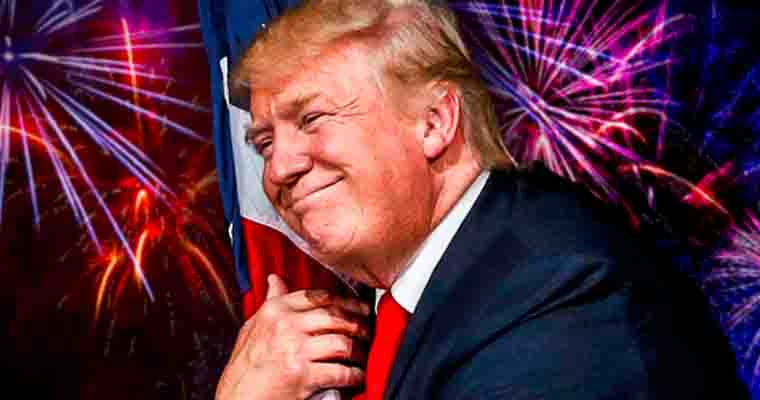 Trump still hasn’t been stumped, according to the latest odds.

Following the first Democratic primary debate of 2019, President Donald Trump — the incumbent Republican seeking reelection next Fall — remains the favorite to win the 2020 presidential election and even saw his political odds increase afterward.

Trump had been listed at +100 or “Even,” which means oddsmakers were giving him exactly a 50% chance to win the general election next year.

However, the current POTUS hit a significant milestone following debates held by the opposition because it marked the first time that Trump has been favored by more than 50% at any point since the 2020 election odds were first released.

The President was given -110 to win on November 3, 2020, and when converted to an implied probability, we can see that the online sportsbooks believe Trump has a 52.38% chance to win back the White House.

Sen. Kamala Harris of California was declared the unanimous by media outlets around the country and is listed currently as the most likely Democrat to take down Trump at +500 or a 16.67% chance to win.

She jumps past former Vice President Joe Biden, who got exposed by Harris during the debate and is now listed at +700 or a 12.50% implied probability.

Sen. Elizabeth Warren of Massachusetts also got a significant boost from her performance on the first night of the debates, coming in slightly behind Biden at +800 and an 11.11% chance to become the next president.

Along with Harris and Warren, former Housing Secretary Julian Castro came out as a big winner after the first debate. Before the debates, Castro was a longshot at +10000 — or a 0.99% chance — but afterward, his odds shot up to +5000, which still makes him a longshot at 1.96% implied probability, but one that the public sees with some value.

Perhaps the biggest loser from the debates was former Texas Rep. Beto O’Rourke, who came about as prepared as the “perro comió mi tarea” niño!

If you don’t speak “Beto,” then just know he prepped as well as the “dog ate my homework” kid, and his odds have taken a hit as a result.

O’Rourke started the year tied with Harris as the co-favorite to win the Democratic party’s nomination at +1000 — a respectable 9.09% chance — but his odds been in freefall following the first night of the debate. Now, he’s listed at +8000, which puts him in the longshot territory with only a 1.23% chance to be elected President.

Below you can find the latest odds for Trump and all of the top Democratic candidates running for president in 2020.

Odds To Win The 2020 Presidential Election