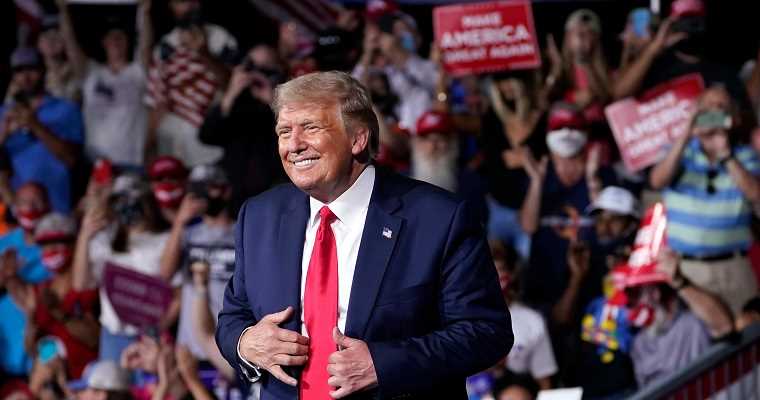 The betting market has long had a love-hate relationship with polling when it comes to political outcomes.

The gambling trends do seem to follow the national and state polls to a degree, at least in terms of the favorite and the underdog. However, there is hidden information in betting lines, much the same way that polls can tell an incomplete story based on their premises.

To see that nuance on the odds boards, you have to understand how betting works and what betting lines actually mean.

For example, at BetOnline, 70% of its betting public is picking Donald Trump to win the 2020 Presidential election.

Of course, the betting lines at BetOnline – to the uninitiated – would indicate otherwise. After all, here’s what the current numbers look like at the sportsbook:

As such a yuge underdog, it might seem counterintuitive that Trump is getting far and away the lion’s share of action at the sports betting outlet.

But remember, the only thing that betting lines really indicate is where the sum total of money is going.

The best online sportsbooks attempt to balance their odds sheets, meaning they try to get the same amount of money on both sides of a given bet, teasing the numbers slightly to earn a small take off the natural difference.

This suggests that, according to the odds, Biden bettors are betting more money per wager on the challenger, while Trump bettors – which outnumber Biden bettors bigly – are putting a much larger quantity of smaller bets on the incumbent.

This is one reason why betting odds and their so-called “implied odds” often have no real-world relationship to one another.

The best place to see how this works isn’t even a betting market, per se.

DraftKings, which is running a fantasy football-like swing state election pool, yesterday tweeted the results of its informal “poll.”

With more than 350,000 respondents (all of whom are DraftKings members, so take this with a demographic grain of salt), this is how US sports bettors and DFS players see the outcome of the general election:

🚨 DK Election Pool Alert: With over 350K entries, a majority of people in every state besides Colorado predict that @realdonaldtrump will be the winner of tomorrow’s election. pic.twitter.com/zUF0uZZtwK

As you can see, the majority of DK players in 49 of 50 US states think Trump will win reelection. Colorado is the sole outlier.

Obviously, Trump isn’t winning states like California, New York, Oregon, and various other leftist strongholds. This simply shows that the majority of DraftKings members living in those states think Trump will win enough electoral college votes to earn a second term in office.

According to DraftKings Nation, the disparity between the betting market and the polls is a stark one, with sports bettors tending to dismiss polls as illegitimate.

“The margin between what the polls say and what the markets say isn’t a a gap — it’s a chasm the size of the Grand Canyon… There’s no other way to interpret the data than this:

People in the betting markets don’t believe in the science of polling.”

And for good reason.

The polls in 2016 were off by seeming orders of magnitude in their proclamations of a Hillary Clinton landslide, and it isn’t clear whether these polling firms – many of which are media arms partnered with MSM entities that have clear narrative interests in polling outcomes – have actually addressed their flaws in methodology.

Nevertheless, regardless of whether the polls are right or wrong, and regardless of who you think will win, the main point is that you can participate in the process – to the degree that it is a process – not only by voting, but also by betting on the outcomes of political races.

Today, incidentally, is the last day you’ll be able to do that for the 2020 Presidential election cycle.

And while outlets like DraftKings can run their pools and even operate sportsbooks domestically in a few of the states that allow such, you can’t actually bet on politics there.

This isn’t a problem with legally licensed overseas betting sites, where US residents can place all the political wagers they wish.

To get in on the action anywhere other than the polling station, all you need to do is sign up with an online operator like the aforesaid BetOnline.

Today, BetOnline offers the following odds which we find particularly interesting and well worth your consideration. There are plenty of other election bets available at the site, but these are the ones that caught our attention – and more than a little bit of our bankroll:

Nominee to Win the Popular Vote

Much like Biden himself, this one’s a no-brainer. Take Creepy Joe at -700.

The chances that the left will take the House, Senate, and Oval Office seem fairly slim. At best, it’s a coin toss: 50/50. As such, any time you’re faced with an outcome that could easily go either way, take the better payout. This is a rule that will make you a lot of money in the long run if you stick to it. We like the “No” at -110, as it seems like the GOP is tracking to keep control of the Senate.

Number of Votes for Donald Trump

Many pundits estimate that this election will yield upwards of 150 million votes. If you believe that, take the over. If you don’t, take the under. Given that Trump won about 63 million votes in 2016, we think the over is a good bet here at -160.

Number of Votes for Joe Biden

On which day will the loser concede the election?

This is going to be the mother of all protracted election outcomes. If you’re old enough to remember Florida’s “hanging chads” in 2000, imagine that scenario on steroids. The favorite here is our favorite, too. Additionally, it’s the only option that gives you plenty of leeway. For every other line, you’ve got to get the exact date exactly right to earn a payday.

To win 311 or more electoral votes, Biden would have to improve on Clinton’s 2016 run by 79 electoral votes. That seems unlikely, especially given the fact that it only takes 270 electoral votes to win this thing. Even Trump’s 2016 landslide only netted 306 votes in the electoral college.

If you think Biden wins outright, take option one at -175. If you think Trump wins reelection, take option two at +225. Nether of the other choices seem likely at all. We’re taking the bigger payout on history repeating.

When will the loser concede the election?

For those uninterested in picking the exact date of concession (and getting far better payouts for doing so), this is a safer betting line than the one listed above. The favorite here looks like a lock.

Will Trump lose every state he lost in 2016?

Probably not, but it’s a tossup. And as with all tossups, err on the side of the better payout. We’re taking “No” at +170.

Will Melania Trump divorce Donald Trump if he loses the election?

Not a chance. He really doesn’t seem like such a bad guy, ya know?

While BetOnline has the most interesting and fun election prop bets available, Bovada Sportsbook actually came out swinging on Election Day.

For most of the run-up to Nov. 3, Bovada had a very limited selection of lines. But today, they’re boasting a whopping 162 different wagers to choose from. You can bet on Trump vs. Biden in the main event, every major US Senate race, select House races, gubernatorial races, state electoral odds, and more.

If you thought filling out that Scantron at the booth took a long time, just wait until you sift through Bovada’s Election Day betting odds!

That said, you’ll have to act fast, because betting closes this evening when the first state results start being published in earnest.

So, for perhaps the last time ever, who ya got?