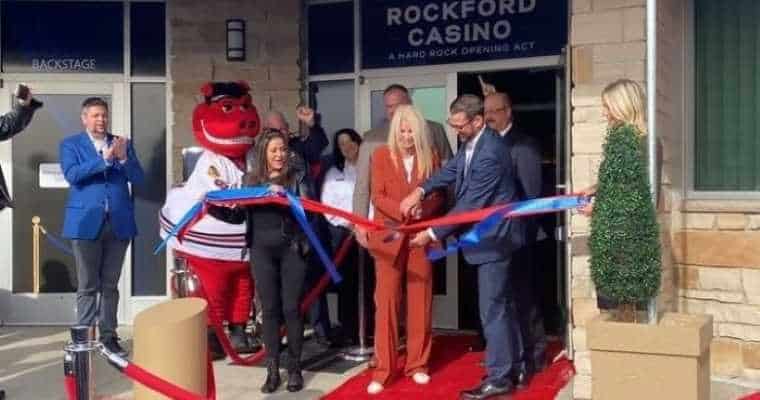 If you ever needed any confirmation that in-person casino gambling isn’t likely to be phased out by legal online casinos any time soon, all you have to do is take a look at the situation in Illinois.

While it’s true that Illinois hasn’t yet legalized iGaming (though mobile sports betting is up and running in the state), the sheer enthusiasm for brick-and-mortar gambling is more obvious than ever.

Back in early 2020, after Illinois approved a new casino venue in the city, the Rockford City Council awarded the contract to Hard Rock International, the famous gaming brand owned by Florida’s Seminole Tribe.

Now, some 20 months later, the venue has finally opened.

In actual fact, the Hard Rock Rockford is still at least two years away from its official grand opening, with construction and development just getting started in earnest.

But it’s what’s happening in the meantime that got our attention and which serves to really hammer home the idea that retail gambling has an allure all its own, immune from the mythical “cannibalization” that legal online gambling allegedly brings.

After all, regardless of domestic IL casino options, residents in the state – and the rest of the US – have long been able to play real-money mobile casino games at the top-rated legal offshore casino sites.

Such access isn’t a secret, but despite being by far the most convenient way to enjoy the gambling pastime in a casual and safe manner, the appetite for in-person play cannot be denied.

So what’s all the hubbub?

At 11:00 AM on Wednesday, November 10, the Seminole cut the ribbon and welcomed IL gamblers into their temporary “pop-up” casino in Rockford.

This venue exists for the sole purpose of serving local players while the much bigger Hard Rock casino is being built.

Except, of course, that everyone’s heard of the Hard Rock.

But what makes this so interesting – and so telling in re the staying power of the local brick-and-mortar casino concept – is the sheer excitement expressed by patrons for what amounts to a temporary, small-scale stopgap.

“We all know that every great musical begins with an opening act. This is no different. Thanks to the unwavering support from our leaders and members of the community, Hard Rock International is able to expand our footprint and bring to life the excitement that our team is so pleased to be a part of. We could not be prouder of this project and look forward to continuing to integrate ourselves into this incredible community for years to come.”

Interestingly, Lucas has cited “musicals” rather than “concerts,” which is peculiar (albeit irrelevant). We’re not sure that too many musicals have opening acts, but – in either case – the wind is decidedly sweeping down the plains.

Chicago no longer has a monopoly on that – or on first-rate casino gambling in Illinois.

Like any opening act, of course, the Rockford Casino isn’t expected to live up to the standards of the main show, but it’s already turning heads.

Indeed, if this was all that the denizens of Rockford were set to receive on the domestic gambling front, it seems they’d be plenty satisfied.

ABC’s MyStateline covered opening day with the story of Diana Johnson, whose enthusiasm is representative of most locals in the region.

Johnson, who’d been hoping for a Rockford gambling venue for over four decades, was bullish on the new Illinois casino:

“I’ve wanted a casino here forever, and it’s finally here and it’s amazing. It’s been a long time coming, and people will be amazed at what we have here now.”

Meanwhile, the venue is attracting players from surrounding areas, too.

Sonia Hicks – who drove two hours to Rockford from her home in Peoria – doesn’t even consider herself a gambler. But the draw of the Hard Rock brand, even in such a limited state of operations – was enough to bring her business to Rockford.

“I’m not a casino person, but I will travel and join the crowd. I’d been here before when it was Giovanni’s. Now I’m back again, it’s the casino of Rockford. Good things happen.”

Janice Meadows, a Rockford resident, believes she’ll be a regular at the new venue as well as its follow-up. She also said that the Rockford Casino is far better than she believed the temporary location would be:

“It’s got more slots for people to enjoy themselves. They don’t really have to wait on four or five slots that they have in different places, so I think it’s really good.”

Interestingly, the number of slots and other amusements at the Rockford Casino pale in comparison to the quantity of games expected at the main venue once construction is completed.

The temporary location features just 8500 square feet of gaming space and a total of 635 combined slots and table games.

That’s all well and good, but these folks ain’t seen nothin’ yet.

Now, we could also take this opportunity to remind Janice here that there’s never any waiting to play the electronic online slots (or anything else) at the legal online casinos we regularly recommend, but that bit of news would probably fall on deaf ears.

And we’re fine with that.

After all, millions of Americans love to gamble online, and that market is booming.

But for millions of other Americans, gambling is (and always will be) all about the environment, the stimulating sights and sounds, the food and drinks, and the community.

And for them, that’s the way it should be.