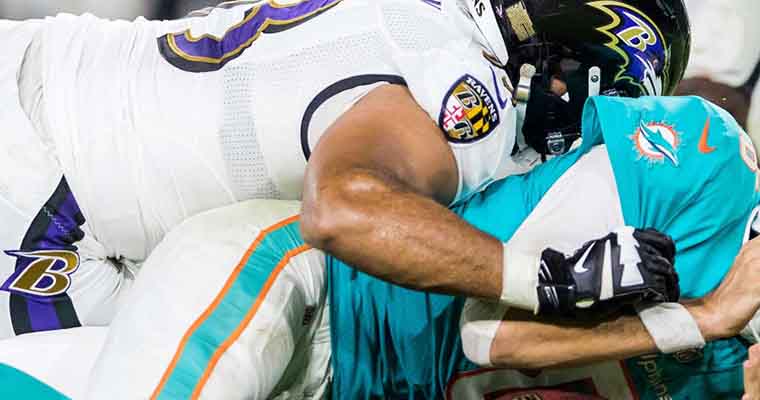 The 6-2 Baltimore Ravens are currently leading the AFC North Conference and appear to be positioned for a deep postseason run. The Ravens should have no problem getting beyond the 2-7 Miami Dolphins on the road tonight, and NFL betting sites are predicting that Baltimore will win by a touchdown or more.

Thursday Night Football on FOX and the NFL Network really serves to spice up the mid-week doldrums with a prime-time professional game as a premier distraction, but more often than not, the TNF matchups are lopsided affairs with top teams facing cellar dwellers.

The championship futures for betting on Super Bowl 56 features the Ravens near the top, whereas the Dolphins are threatening to be one of the first teams to be eliminated from NFL Playoff contention this year. Therefore it should come as no surprise to pro football bettors that the Dolphins are earning NFL odds that imply a beatdown from the Ravens and another dud Thursday Night Football game.

The ratings for TNF have been on an upward trend as of late, with last week’s Arizona Cardinals and Green Bay Packers game doubling the viewership of its nearest competitor. FOX and the NFL Network are testing the loyalty of its audience as tonight’s Ravens and Dolphins contest could get ugly early.

Baltimore quarterback Lamar Jackson is currently third in the NFL MVP odds at BetOnline, but other football sportsbooks have been hesitant to offer similar lines.

Regardless, Jackson’s value to the Ravens is as crucial to their success as any other player is in the National Football League, and his absence from the lineup would spell doom for their championship odds going forth.

The Miami Dolphins were hoping for similar reliance on second-year QB Tua Tagovailoa, and although he has shown promise, it has yet to result in success in the statistic that matters most – wins.

Barring a trade, Tagovailoa is signed for another two seasons in Miami, however, that same luxury is not extended to head coach Mike Flores who is now in his third year with the team.

They’ve yet to make it to the NFL Playoffs under Flores, and unless the Dolphins can get back on track tonight and earn a home victory against the Ravens, postseason contention will be the least of their concerns.

As an indicator of the extreme likelihood that the Ravens will beat the Dolphins tonight is the NFL moneyline odds posted for Baltimore at -380. That means wagers of $3.80 are required in order to net a dollar.

NFL sportsbooks aren’t willing to risk much against the prospect of a Ravens win, but parity is alive and well in the National Football League so it is not out of the realm of possibility that the Dolphins could bring their A-game.

We’re not suggesting that Miami will shock the pro football betting world tonight, but some good money can be earned by wagering on that outcome.