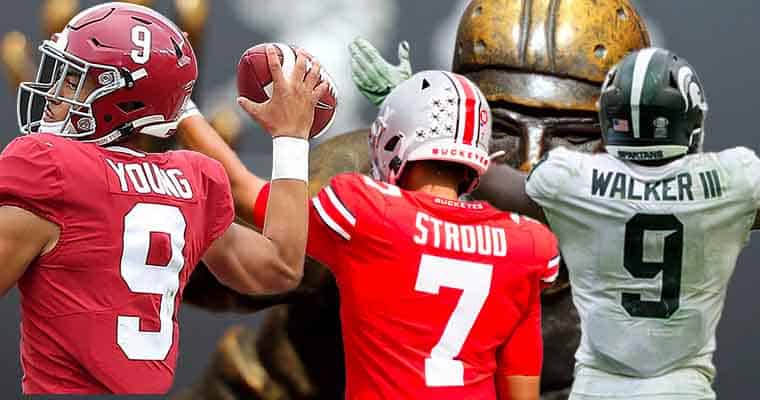 In order to win games at any level of football, consistent and productive play from the quarterback position is an absolute requirement. Running backs have the ability to carry a team on their backs to considerable success, but as the modern game leans more toward passing attacks, that scenario occurs less frequently.

Quarterbacks are obligated to know the assignment of each offensive player on every snap and must possess an intricate knowledge of all plays called, while also holding a few audibles in the mental hopper just in case.

There’s no other position in sports that compares to the quarterback in football, which is why QBs tend to win Most Valuable Player honors most of the time.

College football betting sites have posted futures odds for the 2021-22 Heisman Trophy winner, and Alabama quarterback Bryce Young is at the top of the list as of November 10th.

Alabama is currently second in the odds for betting on the College Football National Championship Game, and Young’s nearly flawless play over the course of this NCAAF season has kept their title hopes alive.

Coming in just behind Young in the Heisman odds at football betting sites is Kenneth Walker III, running back for the Michigan State Spartans who just dropped a heartbreaker to the Purdue Boilermakers.

Walker is a pure runner and is only featured in the receiving gameplan as a decoy. Despite his inordinate production, his carries have been limited, as he’s been breaking off nearly 7 yards each time he is handed the ball in 2021-22.

The Heisman Trophy will be given out to the best college football player in the United States on December 11th, well after the conference championship games have been decided. Both Walker and Young have plenty of time to build upon their resume, or to reveal a flaw in their game between now and then.

CJ Stoud, starting quarterback for the #1 ranked Georgia Bulldogs, is a somewhat distant third in the Heisman betting odds. Much like Young, Stroud is a pure passer and has been incredibly accurate this year.

It could be safely argued that Young has the edge on Stroud in every single statistical category, but there is still some time for CJ to close the gap as there are three more weeks remaining in the regular season as well as the SEC Championship Game where the two of them will face off head-to-head.

The SEC title will be decided on December 4th, and the results of the game will certainly weigh heavily in the minds of Heisman voters as they ponder their collective decisions.

If Georgia beats Alabama, if Stroud hasn’t matched or surpassed Young’s totals by then, he’ll at least be able to claim superiority in the stat column that matters the most – wins.