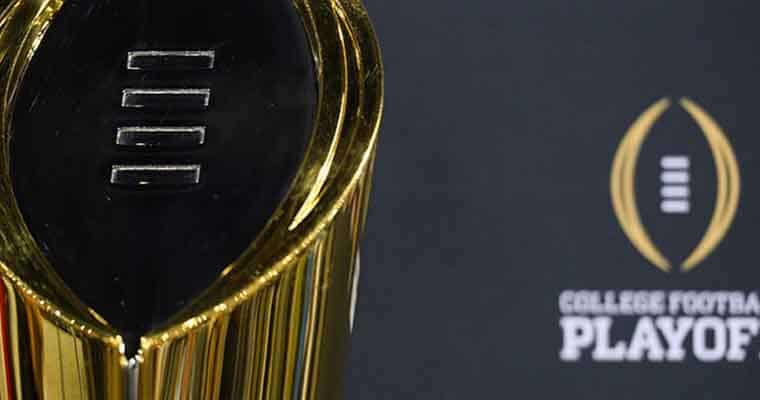 The Michigan State Spartans are the latest top college football team to fall to the Purdue Boilermakers, once again sending the CFP rankings into a tailspin.

The Iowa Hawkeyes had ascended to the number three position in the AP Top 25, and then promptly fell to Purdue. Michigan State had just beaten their in-state rival, the Michigan Wolverines, only to succumb to the same fate as Iowa less than one month ago.

The odds at college football betting sites have readjusted accordingly and offer some insight into what the next CFP rankings could look like once they are unveiled later this afternoon.

The Ohio State Buckeyes are settled in as the third overall team according to the above odds for College Football Playoffs betting, and they will likely remain there until they drop a game or until following the December 4th conference championship weekend.

The elephant in the room is actually not the Alabama Crimson Tide – it is the fact that the top teams in the Big Ten are all sporting at least one loss. How forgiving will the CFP Selection Committee be to a Big Ten champion with 2 losses?

The Oklahoma Sooners are resting in the 4th spot in the CFP odds which would suggest a Big 12 title as well as an undefeated finish. When Power 5 Conferences produce undefeated champions, they’ve always qualified for the College Football Playoffs, but last week’s initial rankings placed them in the back half of the top 10.

While their initial slight is certainly cause for concern among the Sooner faithful, the current trend is for emerging top NCAAF teams to lose a game almost as soon as they attain their elevated status.

A weaker Big Ten helps Oklahoma, as the Oregon Ducks are clinging to relevance largely due to their early-season win over Ohio State. This weekend, the Sooners play the 12th ranked Baylor Bears in what could be their last major test before the postseason.

The above line for football betting indicates that OKU is nearly a touchdown favorite on the road this Saturday at noon when they travel to McLane Stadium and try and trap the Bears.

Of course, Oklahoma will still need to get by the Oklahoma State Cowboys at the end of the season to keep their CFP hopes intact, and when in-state rivalries are in play you can throw the record books out the window.

A weak Big Ten also benefits teams like the Cincinnati Bearcats who will most likely finish without a loss and play in the non-Power 5 American Athletic Conference (AAC).

A two-loss Big Ten champ and a two-loss Alabama Crimson Tide team could be required in order to bolster the Bearcat’s College Football Playoff chances and propel them into the final four.