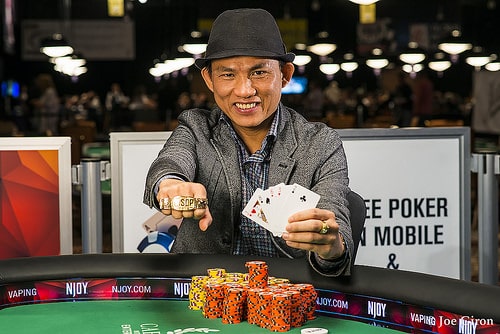 The World Series of Poker has already gone through nearly a week. It is the most notable poker tournament in the World.  Various legally sanctioned online poker sites and events often feed the WSOP tournaments, providing qualifiers and practice for both professional and novice players. In this year’s event, a total of 219 players has been cut down to 27, with Christian Pham atop the leaderboards. Is Pham on his way to another WSOP bracelet victory?

Pham made a name for himself in 2015 by winning a 2-7 Single Draw event. He won $1,500 and a coveted WSOP bracelet—all by accident. Pham registered for the wrong WSOP event and had to learn the game on the fly. Even with the learning curve, Pham somehow managed to beat 219 players to claim the title. His success in the current tournament is a bit surprising considering he has spent most of his time competing in the $235 Rio Daily Deepstack events. Pham is likely feeling some pressure along with his excitement, as Ben Lamb, another noteworthy player, is closing in.

Lamb was crowned the 2011 WSOP Player of the Year, but only finished third in the Main Event during the same year. Ever since then, Lamb has been on a mission to reach the top. He has even gone on record stating he doesn’t care about the final table, just winning the entire competition. Lamb is an experienced player, so that coupled with his top-5 chip count will likely secure a place at the final table, though he still has some ground to gain.

Another former final table player is Antoine Saout. Saout finished third in 2009 and 25th in last year’s tournament. He currently sits in 15th with almost $10 million in chips. Other players with final table experience include Valentin Messina (2nd), Benjamin Pollack (17th), Alexandre Reard (18th) and Michael Ruane (16th). Ruane was finished fourth in last year’s tournament and has not won any event since then. There was another 2016 final table player, Kenny Hallaert, but he was eliminated from contention and finished in 64th place.

This year’s leaderboard reflects the highs and lows of the game, with some recognized names, even those who were successful in last year’s tournament going down early. Pham’s place is one of the most notable storylines from the tournament, but him winning will be one of the biggest of the year. If he can continue building up his chip count and secure a spot on the final table, his odds to win will increase greatly. Pham will have to hold off a horde of ambitious players looking to move up the leaderboards in Day 7 of the competition, including players like Lamb with a chip on their shoulder and plenty of poker playing strategy and experience under their belt.