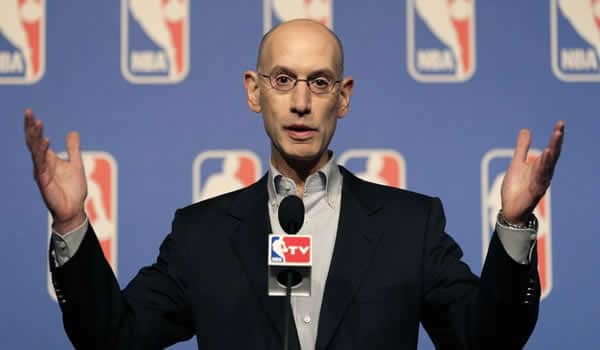 NBA fans were treated the annual All-Star Game last weekend. The weekend is packed with several events, celebrity guests, media opportunities and more. During a press conference, NBA Commissioner Adam Silver was asked about the integrity fees the league is seeking on legal online betting markets with respect to sports gambling. Silver’s response has left some confused over the league’s intentions.

The NBA recently joined with the MLB in asking for a 1% integrity fee on all sports gambling revenue from states where it is legalized. With US based legal sports betting looming on the horizon, it is clear these leagues are beginning to dig in to their bunkers. They want a piece of the revenue and do not look like they will back down.

Silver was asked to justify the 1% fee when it could potentially have financial impacts on states’ sports gambling business models to the tune of 15-20%. The question ended with asking if the league would negotiate with states to move the tax to strictly revenue as opposed to the overall handle. Silver began his answer by questioning the reporter’s math and highlighting the fact that nearly 20 states are prepared to usher in legalized sports betting should the Supreme Court overturn the Professional and Amateur Sports Protection Act (PASPA) in the New Jersey case. He went on to call the ‘integrity fee’ a loyalty fee to the league.

Here is where it gets interesting. Silver spoke on how the league will spend over $7 billion creating games, which he dubbed “content.” He said that the NBA are intellectual property holders over this content and a 1% stake on all state regulated betting seems fair. He predicts that with sports gambling legalized, the league will have to take on new expenses aimed directly at maintaining the integrity of the league, specifically with data monitoring, flagging potential issues and negative trends within the league (or applicable to NBA betting), enforcement, training, etc. Silver mentioned they got to the 1% figure based on jurisdictions outside the US. He concluded his statement by saying the league is happy to sit down with states to find the best possible structure to appease all parties.

The audacity to call the 1% fee an integrity fee while simultaneously throwing integrity out the window is baffling. Silver is basically holding the NBA hostage and saying that they should be paid what they are owed for putting out content. It’s not like they will totally suspend games, so the NBA does not have too much power here. Plus, lawmakers would probably feel better if they believed this 1% was actually going towards monitoring league integrity, not paying off a royalty to the league. The fact that Silver is using their expenses to justify asking for this is also ridiculous given they make a lot more money off these games than what they spend on them.

Silver’s comments over the weekend are the latest in this new venture, but they also paint the clearest picture so far. The NBA is crying that regulation is expensive, but Silver said nothing of the sort in his New York Times op-ed several years back. Now that sports betting is on the brink of widespread legalization, the league is trying to take advantage of states attempting to bring legal gambling into their revenue cloud. There are still some US federal gambling laws in the way of any sort of legalization, but with those possibly being repealed soon, the NBA will be the first of many looking for royalties on its so-called content.