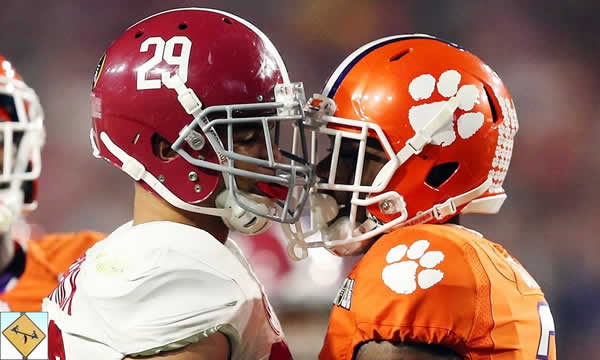 The college football National Championship game is set for January 8, 2018, and will feature the Georgia Bulldogs v. the Alabama Crimson Tide. This game continues the narrative that the SEC holds the best teams in college football. Fans can bet on the game through US based sportsbooks in Las Vegas or licensed offshore sportsbooks, the latter being the primary legal online betting option for US residents.

Fans were treated to the most back-and-forth Rose Bowl in history on New Year’s Day. The Oklahoma Sooners took on Georgia in Pasadena and the game ended up being a double overtime thriller. The Sooners jumped out to an early lead via Heisman trophy winner QB Baker Mayfield. Oklahoma was up 31-17 at halftime and the Bulldogs looked somewhat deflated. Something incredible must have happened in the locker room during halftime, because Georgia came out and scored 14 unanswered points in the third quarter to tie things up. From then on it was an offensive shootout. After 2 successful field goals in the first overtime period, the game was forced into 2OT. Georgia’s special teams blocked a field goal attempt and had a chance to put the game away. RB Sony Michel finished things with an untouched run into the end zone to end the game at 54-48.

Things were kept a little closer in the Sugar Bowl featuring the defending champions Clemson up against Alabama. Bama secured an early lead by putting up 10 in the first. Clemson was unable to get their offense going and analysts certainly noticed the absence of former QB Deshaun Watson. Current QB Kelly Bryant went 18 for 36 on a total of 124 yards and 2 interceptions—not his best work. Clemson finally put up a field goal in the second, but it was all Bama from there. 14 points in the third put Bama up 24-6 with Clemson only able to score another field goal. The fourth quarter was all defense as both teams managed to shut each other out. Unfortunately for Clemson, their offense couldn’t answer back. Bama’s defense shown through during this game and will be a major factor in the Championship.

Alabama will be Georgia’s toughest opponent and bring a stout defense to the game. For Georgia, who’s run-game has been their bread and butter all season, this could prove troublesome. The Bulldogs didn’t face much of a defense in the Rose Bowl, so there must be some key adjustments made to the game plan. Georgia hasn’t seen a national title game since 1983 and Bama will be playing in their third straight. Both teams bring elite qualities in their effective quarterbacks, defensive prowess and nearly unstoppable running offense.

The Crimson Tide is favored to win, but don’t discount the Bulldogs just yet. They managed to pull off 2 incredible wins over Auburn and Oklahoma to get here. If you’d like to place a bet, consider using one of several licensed offshore sportsbooks to do so. You’ll find a host of individual prop bets along with the betting line featuring the point spread, moneyline and totals bets. These are all legal options and fall outside the Professional and Amateur Sports Protection Act, the standing federal ban on regulated domestic betting.