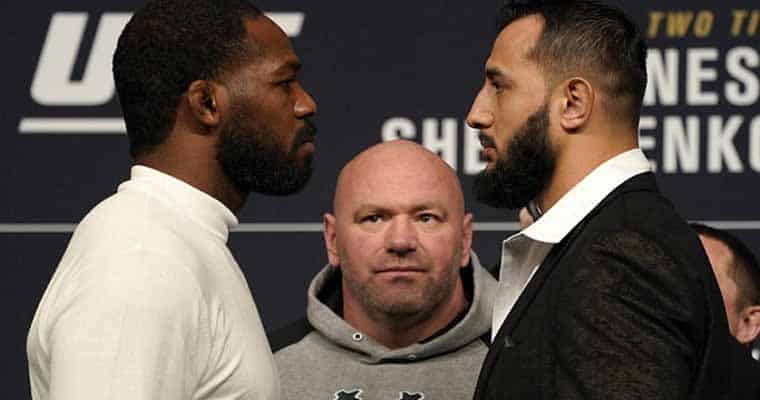 The Ultimate Fighting Championship makes its way to the Toyota Center in Houston this Saturday, February 8th, as Jon “Bones” Jones (25-1-0, 1NC) takes on Dominick Reyes (12-0–0) for the UFC Light Heavyweight Title.  Our recommended sportsbooks have posted betting lines for all fights on the UFC 247 card, but most of the attention will be on Jones and Reyes when they take to the octagon to determine mixed martial arts supremacy.  Betting on the UFC is just a few clicks away, and we’ve got the coverage you’ll need to wager on UFC 247.

Both fighters are unbeaten.  Jones has one blemish on his loss record, but that was due to illegal elbow strikes.  At 32 years of age, no one has ever beaten Jon Jones.  Although much less experienced, Reyes is also undefeated.  This is easily Reyes’ biggest bout to date, as he attempts to establish himself alongside the UFC elite and hand a legend the first defeat of their career.

Still, despite being on the wrong side of 30 years old, Jones is a heavy favorite at -500, meaning a $500 bet will payout $100 if Jon wins.  MyBookie has posted a plethora of UFC prop bets.  The odds favor the fight not going the distance, meaning the fight will end with one of the combatants being knocked out, or possibly disqualified.

If this fight finishes in a draw and you’ve got the courage to wager on it, then you could be in for a big payday.  A wager of $100 will earn a payout of $8000 if it happens.

Reyes vs. Jones – Method of Victory

Also up for grabs on Saturday night is the UFC Women’s Flyweight championship.  Current champion, Valentina Shevchenko (18-3-0), is a heavy favorite to defeat challenger Kaitlyn Chookagian (13-2-0) with -1200 odds.  Even though the odds are stacked against her, Kaitlyn is exuding confidence and is already making plans for her next fight after defeating Shevchenko.  If you are savvy enough to predict which fighter will win, you can earn a huge payout by betting on which round it will happen in.

Chookagian vs. V Shevchenko – Round Betting

This bout has all the potential in the world to become an entertaining brawl.  Both heavyweights have been the victim of disappointing defeats as of late, and both need a win on Saturday night to maintain their status on the UFC roster.

Adams (5-2-0) has all the charm of a wrecking ball as he usually tries to end fights early, utilizing heavyweight haymakers that sometimes hit the mark.  Tafa (3-1-0) likes to let opposing aggressors tire themselves out so that he can patiently deliver blows to a fatigued opponent.

Adams is a pretty heavy favorite, but Tafa is prepared to absorb his violent physical explosions with balance and persistence. The lighter weight classes may provide more of a mixed martial arts clinic, but there’s just something about two 250+ pound beasts swinging wildly in the octagon that is deeply enjoyable.  I’m looking forward to this fight more than any other on the card.

I’m feeling pretty good about Tafa’s chances of winning this fight, and there are excellent payouts available if you can predict the exact methodology of his victory.

Tafa vs. Adams – Method of Victory

Of course, there are many ways to legally bet on the UFC.  Sportsbooks are coming up with loads of futures and prop bets all the time.

Below are Bovada’s odds to win the remaining fights on the UFC 247 card: