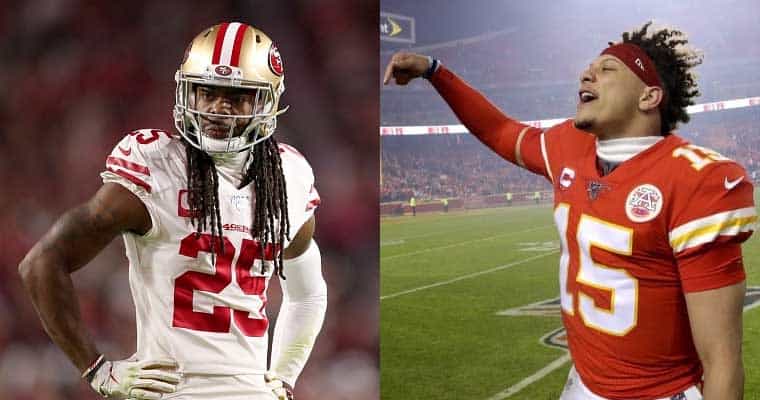 It’s the Friday before the Super Bowl, and betting lines have either tightened or stabilized.  Let’s have one last look at the odds to win Super Bowl 54 before championship Sunday.

Who is the Super Bowl favorite?

Initially, our recommended NFL sportsbooks had posted Super Bowl betting lines that ranged from 1 to 2 points, but now, the line has shrunken to a range of 1 to 1.5 points.  All signs point to this being a close game.

What is the Over Under on the Super Bowl?

The Chiefs and 49ers are predicted to combine for a score between 54.5 and 55.5 points, depending on when sportsbook you check.

Combining this over-under with the point spread gives us a potential outcome of this final score:

Super Bowl 25, when the Giants defeated the Bills 20-19, is the only time that the game’s final score has been within 2 points.

Super Bowls are no longer routinely blowouts.  Between 1984 and 1998, most Super Bowls were not closely contested matchups.  Since that time, only three Super Bowls can be qualified as a rout.  Most NFL title games these days are competitive.

The 49ers are sitting at even odds, so you can double your money if you bet on them, and they win.  If you wager $125 on the Chiefs, you can earn a payout of $100 if they hoist the Lombardi Trophy.

How Much Money Has Been Bet on the Super Bowl?

Reports are coming in that a record 6.8 billion dollars will be bet on this Super Bowl, and Vegas is predicting a record-breaking amount for their sportsbooks over the weekend.

There have been several large bets made already on the Super Bowl, and the wagers fall on both sides of the matchup with large bets being placed on both teams.

CBS Sports is reporting that bettor Jim “Mattress Mack” McIngvale has placed a one-million-dollar wager on San Francisco to win.  There have been at least nine other bets placed so far that totaled $100,000 or more.

What’s driving the popularity of betting for this Super Bowl?  Since neither team has won a Super Bowl in recent years, perhaps the unknown is what is driving the intrigue.

My guess is that everyone is happy that the Patriots are not involved.  We can finally enjoy a Super Bowl and not have to worry about Belichick and Brady celebrating at the end.

It’s hard to imagine this being a close game.  It is Kansas City’s game to lose.  If the 49ers are going to win, they will need to establish an early lead and continue to score.  San Francisco can keep ahead of the Chiefs’ pace, but will they?  I’m not sure, but I am confident that Kansas City is going to put up points.

Regardless of who wins, only fans of the losing team will feel heartfelt defeat and disappointment, since the Patriots are watching the game from home.