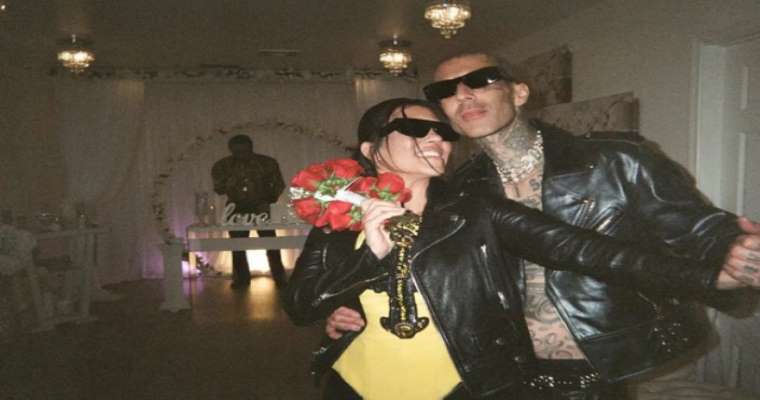 Of course, Kardashian divorce odds are also locked and loaded.

Some things are just inevitable…

Kourtney And Travis Marry In Vegas

On Sunday, media mogul Kourtney Kardashian posted images from an impromptu practice wedding in Las Vegas with her fiance, Travis Barker. The two have been engaged since October 2021, leaving fans excited to see exactly when and how the couple will tie the knot.

“Found these in my camera roll. Once upon a time in a land far, far away (Las Vegas) at 2am, after an epic night and a little tequila, a queen and her handsome king ventured out to the only open chapel with an Elvis and got married (with no license). Practice makes perfect.”

The Kardashian-Barker nuptial took place shortly after the 2022 Grammy Awards. To be clear, Kourtney and Travis are not yet married—at least, not officially.

Nonetheless, fidelity and divorce odds are live across most major betting platforms.

How Long Will Kourtney Kardashian’s Marriage to Travis Barker Last?

Will Kourtney Get Back Together With Scott Disick Before The End of 2022?

These odds aren’t the kindest well-wishes for the Kardashian family. But, to be honest, failed marriages make better headlines than healthy ones.

Take, for example, the Super Bowl media whirlwind prompted by rap artist Kanye West. That fateful weekend in February, Ye blew up Instagram with dozens of posts alleging that Kim is an unfit mother and that Pete Davidson is a monster.

Return Of The Legal Kanye Lines

For weeks on end, Kanye odds dominated legal entertainment betting lines. And though Kourtney’s practice wedding has drawn public attention away from the Kim/Kanye drama, the odds remain.

Will Kim Kardashian Marry Pete Davidson Before The End Of The Year?

Will Kim Kardashian And Pete Davidson Breakup Before The End Of The Year?

Will Kanye West Create A Physical Altercation With Pete Davidson Before The End Of The Year?

Will Kim And Kanye Get Back Together Before The End Of The Year?

Kardashian odds are usually a safe bet because they’re a predictable bunch. It’s safe to say that Kim and Pete won’t be married by the end of the year, given all of the backlashes she has received for having three ex-husbands.

Still, it also seems unlikely that Kim would break up with Pete this year. The family seems to be fond of him and Kardashian fans seemed to have quickly warmed up to the couple.

And while the happiness shared between the two is certainly enough to drive Kanye crazy, we highly doubt that Kanye and “Skete” would ever get into a physical battle. It would just be poor publicity for everyone involved.

That being said, there is virtually no chance that Kim and Kanye will ever reunite. Especially not this year. Even if the spark were still there, the scrutiny would never end.

To place a bet on any of these lines, head over to the BetUS Sportsbook.