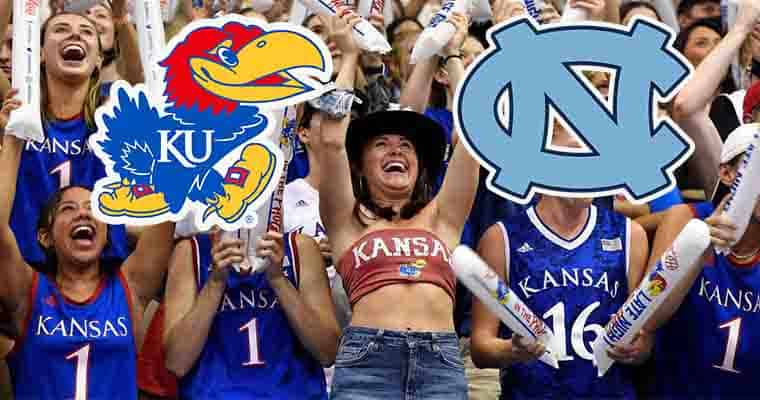 The 2022 Men’s Division I Basketball Tournament Finals begin tonight at 9PM where the #1 seed Kansas Jayhawks will play the University of North Carolina Tarheels who have made it to the championship game as an 8 seed.

The Tarheels are a 4 point underdog in the spread for tonight’s contest after upsetting the Duke Blue Devils in the Final Four last Saturday night.

Regardless of how UNC has underperformed during the regular season, they are living up to their potential at just the right time as head coach Hubert Davis is on track to potentially win his first National Championship and the seventh overall for the Tarheels.

However, legal March Madness betting sites are not anticipating an outcome for tonight’s game where the Tarheels are cutting down the nets with Davis hoisted atop his players’ shoulders.

No. Instead, they’re suggesting that Kansas wins their fourth NCAA College Basketball National Championship as the last remaining one-seed in the Tournament.

Current Jayhawks Head Coach Bill Self won a March Madness title with Kansas in 2008, their third overall, placing him alongside other former winners Phog Allen and Larry Brown.

A win tonight will place Coach Self in a category all to himself (no pun intended) as a second title would notch him as the best Kansas Jayhawks basketball coach of all time.

A win by the Jayhawks will pull them even with the University of Connecticut Huskies, tying them both for 5th all-time in the history of college basketball with 4 championships.

The following line for college basketball betting has been posted at Bovada, but there is some variance that can be taken advantage of by shopping the NCAAB odds at other online books.

For instance, MyBookie features the exact same point spread for the March Madness Final as Bovada, but the moneyline odds to win differ for each team. The Tarheels’ odds at MyBookie award at 5 cents more per dollar (+165) wagered but requires an additional 10 points of risk for bets on Kansas to win.

BetOnline is offering a moneyline of +170 for North Carolina for a higher Tarheels-based payout than either MyBookie or Bovada to win but also projects a spread of four total points.

Neither Kansas nor UNC will be satisfied with simply advancing beyond the Final Four. Something has to give, however, as there cannot be co-champions. Be sure to get your NCAAB bets in early so that the best odds can be secured that will deliver the highest payouts on the board.