Skip to content
HomeNewsMcEnroe Controversy Refusing To Simmer Down 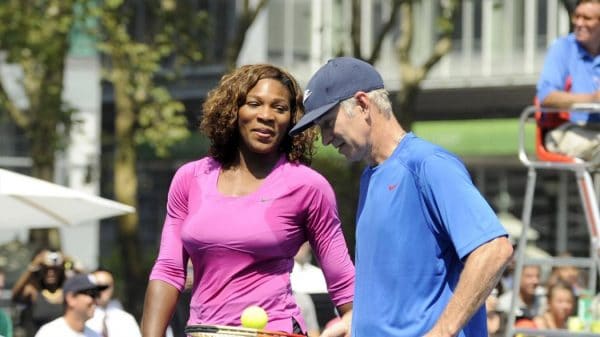 Could Venus Williams hold her own in the men’s tennis circuit? Former player John McEnroe does not seem to think so. Who wins the battle of the sexes?

Former tennis player, John McEnroe, recently came under fire for comments he made about Serena Williams, another accomplished player. McEnroe was promoting his new book when he stated that while Williams is the best female player, her status in the rankings would decline significantly if she played in the men’s circuit. These comments stirred up a bit of controversy and have been deemed sexist. McEnroe refused to take back his statements when asked, though he did admit they were unnecessary.

Williams is one of the most recognized players in the world. She has established herself as one of the best female players in the world, if not the best. Her record speaks for itself. McEnroe is also a well-known figure with accolades of his own. His comments reflect the age-old adage about men being better than women, especially when it comes to sports.

This incident brings the infamous Battle of the Sexes to mind. In 1973, 55-year-old Bobby Riggs played 29-year-old Billie Jean King. Riggs had publicly stated that women’s tennis was inferior and that he could beat any of the top female players, even at his current age. He first beat Margaret Court, one of the top female players, prompting King to step in. King won all three sets and proved to the sports world that women’s tennis was serious. Many people denounced the victory, saying that the age difference was too much and King did not play all that well. There were also allegations of Riggs purposely throwing the match to clear his gambling debts.  This was well before legal online sports betting, but I imagine that the King-Riggs tennis match would have had some pretty interesting betting odds.

These comparisons between men and women are certainly nothing new. Williams even spoke on the subject herself once while making an appearance on the Late Show with David Letterman. “For me, men’s and women’s tennis are completely almost two separate sports. If I were to play Andy Murray, I would lose 6-0. 6-0 in five to six minutes. Men are a lot faster, they serve harder, they hit harder. It’s just a different game,” said Williams.

Williams, who is dealing with a pregnancy, eventually responded to McEnroe’s comments. She urged McEnroe to keep her name out of statements that were not “factually based”. Interestingly enough, her comments on Letterman point towards a different narrative. Whether she still believes she would lose to Andy Murray is unknown, but she did play Karsten Braasch, a ranked men’s player, back in 1998 and lost 6-1. Kraasch was the 203rd ranked player on the men’s circuit at the time.

There is no denying Williams’ dominance in the women’s tennis circuit, but could this dominance translate into the men’s circuit? Her performance against Kraasch (albeit in the 90s) and her comments on Letterman point in one direction while her performances over her career point another. In any case, McEnroe refuses to take back his statement. Perhaps Williams and he should host another Battle of the Sexes match to settle this personal score.