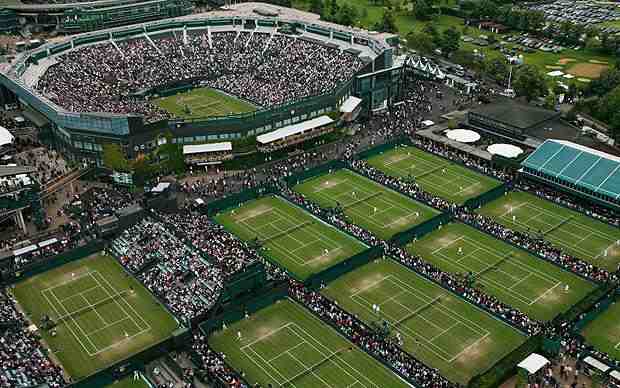 The 2017 Wimbledon competition is underway and has had its share of stories. From upsets to injuries, this year’s famous tennis tournament is proving yet again why it is so popular. As the oldest tournament in the world, it is regarded as the most prestigious of tennis honors. It is also a popular tournament among bettors, with millions of dollars wagered on Wimbledon each year.

On the men’s side, Wimbledon features some of tennis’ most successful characters in Roger Federer, Andy Murray, Novak Djokovic and Rafael Nadal. However, in one of the tournament’s biggest upsets, Luxembourg’s Gilles Muller beat the Spanish Nadal over five sets. This loss eliminated Nadal from the tournament along with his hopes of winning a third Wimbledon title. The match was an intense display of skill and competitiveness, with Nadal coming back from two sets down before losing in the final set, which took just over 2 hours to complete. Nadal was considered a favorite to win this year’s tournament after having several successful tournament outings (he reached the Australian Open final, though lost to Federer), but it was not meant to be.

Manic Monday, as it has been dubbed, featured several other key fixtures. Roger Federer advanced past Grigor Dimitrov in 3 sets and looks to be in fine form heading into the next round. Andy Murray beat Benoit Paire in 3 sets and Novak Djokovic beat unseeded Frenchman Adrian Mannarino. Despite shoulder pain and issues with the turf, Djokovic managed to maintain his unbeaten streak in the tournament.

The women’s fixtures saw victories for Garbine Muguruza, Simona Halep, Venus Williams, Coco Vandeweghe, Johanna Konta, Magdalena Rybarikova, Svetlana Kuznetsova and Jelena Ostapenko. Interestingly enough, the majority of women players left entered the tournament unseeded, showcasing the level of competition present in the current field. The next round will be tough for the remaining players.

Speaking of the next round, the quarter-finals, there have already seen developments. Venus Williams defeated Jelena Ostapenko and Garbine Muguruza beat Svetlana Kuznetsova in their respective matches. The first men’s matches include Gilles Muller v. Marin Cilic, Milos Raonic v. Roger Federer, Toms Berdych v. Dominic Thiem and Andy Murray v. Sam Querrey. Murray is the defending champion in the Men’s Singles category and will look to retain his title as the top-seeded player. Serena Williams holds the title in Women’s Singles, but she is not playing in this year’s tournament for maternity reasons.

The Men’s Doubles are currently in the quarter-final round, as are the Women’s Doubles. The Mixed Doubles teams are still playing in the Round of 16. Although the Doubles categories do not warrant the same amount of attention and splendor of the Singles, there is still fierce competition. Doubles tennis is also an entirely different facet of the game with its own tactical elements and strategies.

Another interesting anecdote coming out of this year’s Wimbledon is the Larry Bird-doppelganger. A Wimbledon official was spotted during one of the matches and a photo began making the rounds on social media. This photo quickly drew comparisons to the famous basketball player and the resemblance is uncanny. While this may not have an effect on the tournament, it has prompted some humorous conspiracy theories about Bird’s double life.

All eyes will likely be on the semi-final round, as 2 of the 3 famous Men’s Singles players will have to face off (provided they advance). Fans will be anxiously awaiting to see if Murray can advance to the final and have a chance to repeat, or if Federer or Djokovic will have anything to say about it. Wimbledon has already given plenty of exciting action and there are no signs of it slowing. Remaining matches are included in the betting lines at legal sportsbooks offering odds on tennis.