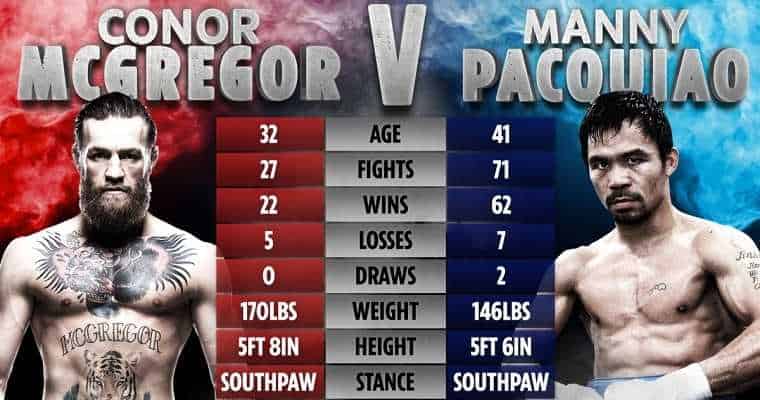 After a lengthy layoff, Conor McGregor came back to the Octagon for his seventh PPV headliner in January 2020, taking on Donald “Cowboy” Cerrone in UFC 246.

The highly anticipated fight earned a million domestic buys and was over in 40 seconds, heralding the then-31-year-old Irish welterweight’s return to prominence in the sport.

That return, however, was short-lived, as negotiations fell through for another 2020 UFC main event later in the year.

Whether the holdups were related to coronavirus lockdowns, travel restrictions, or plain old money, the upshot is that McGregor – on Saturday – announced that he was bailing on the promotion and instead would be fighting Manny Pacquiao in a boxing match slated for sometime in 2021:

Anyway all water under the bridge who gives a fook.
I’m boxing Manny Pacquiao next in the Middle East.

The above tweet received immediate attention and almost immediate dismissal from the sporting media, as the Notorious McGregor is notorious for his often-empty showmanship.

The common consensus was that Pacquiao – one of the greatest boxers of all time and the only eight-division world champion in the sport’s history – wouldn’t be interested in a half-hearted exhibition akin to the Mayweather-McGregor bout in 2017.

When asked for comment, Pacquiao was found in the gym, already training for the upcoming megafight, where his camp confirmed his intention to face McGregor next year.

And the most legitimate online sports betting sites didn’t wait either, posting odds on the contest almost immediately:

Obviously, McGregor’s chances against Pacquiao in a boxing ring are minimal, and the betting lines reflect that.

Interestingly, at Bovada Sportsbook, the early action coming in seems to indicate that the site’s bettors are giving McGregor much more than the puncher’s chance he has, though we expect his +325 odds to lengthen considerably.

If you’re a Bovada member and wish to wager on McGregor, we recommend waiting or signing up at one of the other boxing betting sites offering lines for this fight.

Conversely, if you think Pacquiao will make short work of McGregor once the pair laces ‘em up, you’ll want to wager at Bovada immediately to get the best possible payout.

It’s all about the Benjamins, after all.

Which brings up another point: When it comes to the Pacquiao-McGregor bout, whether the money is quite in the realm of what McGregor earned against Money Mayweather in 2017 is functionally irrelevant.

It’s true that McGregor is reported to have pulled down a $30 million guarantee and another $100 million in PPV splits for that fight, while Mayweather took the lion’s share of the purse (70-30), raking in a guaranteed $100 million and a final haul of $280 million.

But this fight doesn’t have to generate nearly that amount of revenue to offer Notorious a much bigger payday than anything the UFC is willing to offer its biggest draw.

For his part, as legendary as Pacquiao is, he’s not as globally popular as Mayweather, and there’s some question as to which fighter – the Filipino or the Irishman – will actually hold marquee status for the upcoming superfight crossover.

Nevertheless, even if this McGregor-Pacquiao fight doesn’t attract the five-million-plus PPV buys and generate the same amount of money as McGregor’s previous dance in the squared circle, the event should still be one of the biggest in Pay-Per-View history, and both fighters could easily earn nine-figure paydays.

According to Pacquiao spokesman Jayke Joson, the money is a huge motivating factor for the PacMan, albeit not for the reasons one might expect:

“For the sake of all the Filipino Covid-19 victims, Senator Manny Pacquiao will be fighting UFC superstar Conor McGregor next year. The huge portion of his earnings will proceed to those who are affected nationwide by the pandemic.”

Regardless, of course, this matchup appears to be easy money for both fighters.

In the Octagon, McGregor won’t earn a purse remotely like the one he’s set to collect for facing Pacquiao in a boxing ring, and he’ll take much less of a beating, to boot.

Plus, given his comparative youth (he’s 10 years Pacquiao’s junior), his comparative weight (he’s 25 pounds heavier than Pacquiao, though that will surely narrow by fight time), and his two-inch height advantage, he has every bit of a puncher’s chance to put Pacquiao on the canvas.

It’s not likely, of course, but it is possible, and those wagering on the fight at legal online sportsbooks are probably going to mirror what they did in 2017, placing a much higher volume of much smaller bets on McGregor in the hopes of hitting on the upset.

Still, for that to happen, McGregor actually has to hit Pacquiao, and given the latter’s legendary speed in the ring, that might not be such an easy task.

Nevertheless, even as the fighting world denigrates this as some sort of harmful spectacle for the sport, there are no harmful spectacles, and boxing needs this in a stretch that’s seen recent champions fizzle to an alarming degree.

Yes, many are claiming that McGregor is a sellout, and they’re slinging all the vitriol you’d imagine re Notorious “ducking” his legitimate world-class competition in the UFC. But McGregor will be the first to tell you that he is selling out.

And if you want to get in on the action, betting’s the only game in town.