Skip to content
HomeNewsMichigan Up Against Brick Wall In Villanova 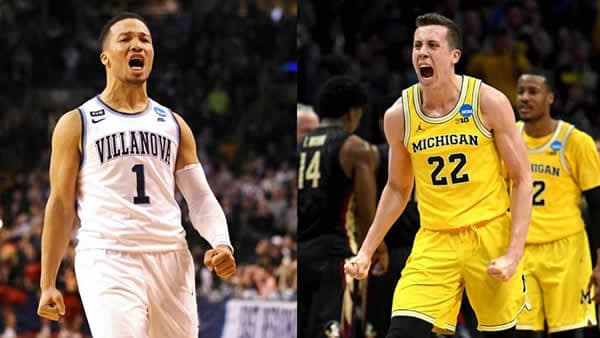 Michigan knocked out Loyola in the Final Four to reach the national championship. The win may not have been as loud as they would have liked, but a win is a win. On the other hand, Villanova decimated Kansas to reach their second national title game in 3 years. It doesn’t take much to see why the oddsmakers for  March Madness betting have Villanova as -7 point favorites. Michigan’s defense will be their saving grace in this game, but will it be enough to stop the red-hot Wildcats?

Villanova imposed their will early on in the Final Four matchup against #1 Kansas. They attempted 18 3-pointers before Kansas attempted their first. The Wildcats led by double digits for 35 minutes. They had 6 players in double digits by the end of the night. It honestly may have been the best game of their tournament.

Eric Paschall led all scorers with 24 points. He also had 3 rebounds and 3 assists. Jalen Brunson, undoubtedly Nova’s best player throughout the tournament, scored 18 points and had 6 assists. Omari Spellman and Donte DiVincenzo each had 15 points, but it was their 13 and 8 rebounds that highlighted their performances. Phil Booth and Mikal Bridges each had 10 of their own.

Nova’s strength is in their 3-point shooting. They tied the record for most in a Final Four game (13) by halftime. If Michigan has any chance of stopping them, they have to eliminate the 3-point opportunities. This will require a constant full-court press and tight coverage. Michigan has a good defense, but if they let Nova get going early it could be over for them.

Michigan is a second-half team. They came back against Loyola in the Final Four and did the same against Houston and Florida State. The only problem is that you can’t pull this second-half-comeback narrative against a team like Villanova. Nova has the potential to build an insurmountable lead early on—just look at Kansas. They have too many weapons and while their bench may seem to falter in terms of what they can offer, the regular rotation is firing on all cylinders. Teams may try to get Villanova’s bench on the floor, but by that time it won’t matter.

Michigan’s Moritz Wagner had the best night in the Loyola game (15 rebounds, 1 assist and 24 points). Charles Matthews was second with 17 points and 5 rebounds. The Wolverines have quality players, but they are inconsistent, especially when it comes to the 3-point shot. They were throwing up bricks against Loyola, something that you can’t afford to do against the Wildcats.

All the legal online betting experts have Nova winning tonight and it is hard to argue their logic. Yes, there have been many upsets in this tournament, but those typically stop around the Final Four point. Michigan is the David to Nova’s Goliath and this game could become lopsided quickly. It will take a defensive masterclass to best the Wildcats. Michigan may be up to the task, but they need complete focus from everyone on the floor.