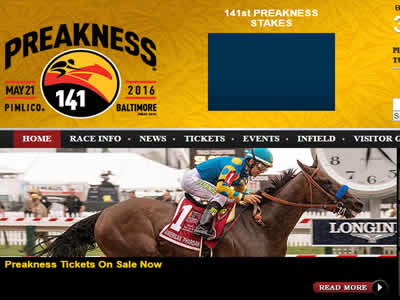 While there are many substantial thoroughbred races being run all around the world, the main focus is on Baltimore, Maryland and the Pimlico racetrack. That is because the 139th running of the Preakness Stakes is about to commence on May 17, Saturday at 6:18 PM EST. The important second leg of the elusive Triple Crown of US thoroughbred horse racing, the Preakness is shaping up to be an interesting 1 3/16 mile race for several reasons. Hall of Fame jockey Calvin Borel hopes to successfully go back in time, one of the most accomplished female jockeys will be on board a pretty decent colt, and a female trainer will try to steal away the Blanket of Black-Eyed Susans from California Chrome. The three-year-old California colt with the shiny name has won his last five races, including the first leg of the Triple Crown, the Kentucky Derby two weeks ago.

Every race run is a moment in history, but this year’s Preakness Stakes makes for some memorable history in at least one regard. A filly will run the Preakness for the first time since back in 2009, when the aforementioned Borel rode filly Rachel Alexandra to victory. And with trainer Linda Rice saddling up Kid Cruz, there is another notable female achievement. Also, Rosie Napravnik will be in the stirrups on board Bayern, to mark the first time that a female jockey and trainer competed in the Run for the Black-Eyed Susans at the same time a filly was trying to win the race. The Napravnik/Bayern duo currently stands at around 12 to 1 to win, and longshot filly Ria Antonia is currently showing 33 to 1 odds to spoil California Chrome’s pursuit of another Triple Crown leg.

As the first jockey to win the first two legs of the US Triple Crown on separate horses, and a three-time Kentucky Derby winner, Calvin Borel has just about accomplished everything possible in the sport of thoroughbred horse racing. And if he can push Ria Antonia to a victory this Saturday, he will repeat his 2009 achievement at the same track on yet another filly. California Chrome cruises confidently into a 5 to 8 odds on favorite spot, and it is hard to argue against that horse’s chances of heading into Belmont in a few weeks with a serious chance at a Triple Crown take-down. Social Inclusion appears at this time to be the most solid competitor for CC in the Preakness, currently showing 6 to 1 odds.

Ride on Curlin and Kid Cruz are next up on the odds chart at around 12 or 14 to 1, and Dynamic Impact will certainly make just that if he can win this important race despite 16 to 1 odds against. General A Rod, Pablo Del Monte and Ring Weekend are offering some rather attractive odds at anywhere from 20 or 25 to 1. The 10 horse field is considerably shorter than this year’s Kentucky Derby, and doesn’t appear to be quite as fast from top to bottom. However, the Derby was predicted as having a very fast group of horses, and the winning time run by California Chrome was anything but impressive.

This time of year, even average sports fans who watch very little horse racing in general will place bets on the Kentucky Derby, the Preakness Stakes and/or the Belmont Stakes. The enormity of those US thoroughbred horse races and the potential Triple Crown implications every year draw virtual and real world bettors. Since legal horse betting online is available from around the globe through legally licensed offshore sportsbooks like Bovada, there is no excuse not to join in the excitement that is the Preakness Stakes by placing a wager on your favorite three-year-old thoroughbred. You can place a bet on the ladies by plunking down your cash on Bayern, Kid Cruz or Ria Antonia, or make the popular bet and wager that California Chrome will capture his second Triple Crown leg. However you bet and whichever horse you back, the excitement of holding a real money win, place or show ticket on the 2014 Preakness Stakes is a possibility with just a few clicks or taps on your nearest PC, tablet or smartphone.