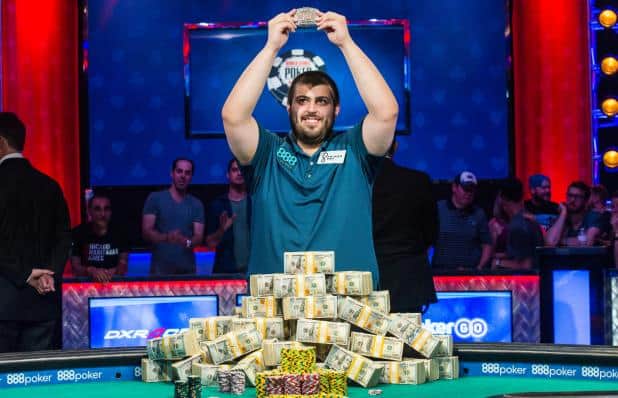 Scott Blumstein pulled off the impossible by winning this year’s World Series of Poker no-limit Texas Hold’em main event. The New Jersey native won in front of dozens of friends and family and took home $8.1 million after defeating Daniel Ott on the 246th hand of the final table. The duo played 60 hands between themselves before Blumstein finally came out on top in spectacular fashion.

“I’m really happy about how I played tonight,” said Blumstein after his victory. “This is just one poker tournament. It takes variance and luck and playing your best, and all those things came together, and I’m happy to be the winner.”

The rookie player bested over 7,200 players to reach the final table. Each of the 9 final table participants were guaranteed at least $1 million. This event was the end of the year’s series comprised of dozens of tournaments. Over 120,000 entrants from around the world played in the preliminary tournaments leading up to the finale in Las Vegas. Players from the United States, Argentina, France and the United Kingdom made up the final table.

Blumstein’s story is particularly remarkable because he has little WSOP tournament experience. He graduated from Temple University with a degree in Accounting and credits his skills to online poker. Before this event, his total live winnings were just north of $300,000. Blumstein’s $8.1 million payout and famed WSOP bracelet now certify him as an established player in the industry.

He says he wants to take a break from the game, so his winnings will likely not go to funding more poker. Blumstein cites money as his motivating factor to play, but his other aspirations, whether that be opening his own business or going back to school present more exciting opportunities. With this victory, he can certainly afford to do either.

New Jersey provides an interesting training ground for poker players and is certainly a determining factor in Blumstein’s success. The state is one of few across the country to offer legal and regulated online poker to its residents. Through age and location verification, New Jersey residents can play real money or free play games from the comfort of their own homes. Blumstein said that he has seen an incredible volume of hands through his online play, allowing him to learn more about the game via experiencing different poker scenarios.

Online poker sites will take this news in stride as they aim to attract more users. More states are beginning to open up to the idea of hosting legal regulated online poker, and with Blumstein’s grassroots story appealing to the amateur player, it seems likely there will be a demand for legitimate state based poker action.Beginning with Chris Moneymaker in 2003, stories like this one provide legitimacy for the online poker industry and help to combat a negative stigma associated with online betting entertainment. As state regulated options slowly trickle onto the scene, legally sanctioned online poker sites located offshore will continue to provide a secure and high quality environment for poker players to sharpen their skills.