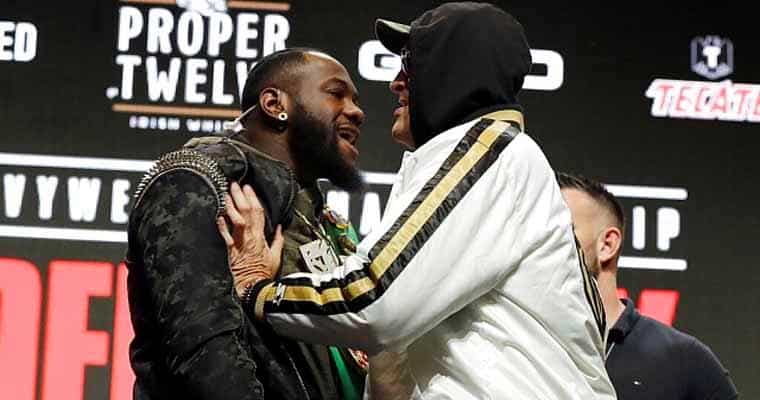 The long-anticipated rematch between WBC Heavyweight Champion Deontay Wilder and Tyson Fury is this Saturday night at the MGM Grand in Las Vegas, Nevada. The eyes of fighting fans across the globe, as well as fans of US sports betting, will be focused on this contest between elite heavyweights. We take a look at the tale of the tape and the odds that have been posted for Saturday’s fight.

Fury vs. Wilder: Tale of the Tape

Both men enter the contest with an undefeated record and intend to hand the other their first defeat as a professional boxer. Both of their records feature only one blemish, a draw that they both earned against each other in December of 2018.

The draw was highly disputed because Fury was knocked down in the twelfth round but put together enough of a flurry to inspire the judges to vote the bout a tie. Naturally, this has satisfied neither the fans nor the two gladiators involved, and a rematch has always been on the horizon.

Saturday’s fight will prove to the world who the better fighter is, and, according to Yahoo Sports, will place the victor at the top of the heavyweight championship boxing ranks. The two met briefly for a press photo on Wednesday evening and they couldn’t help but put their hands on each other.

Ahead of their rematch this weekend, Deontay Wilder and Tyson Fury got up close and personal last night

Who will win the fight?

These odds have tightened and are pretty much even money on the eve before the weigh-in. A $125 wager placed on Wilder will earn a payout of $100 if he can win the fight.  Fury hopes to outlast his opponent by sticking to his classic pugilistic strategy, keeping a strong defense combined with opportunistic, angular punches.  Wilder plans on utilizing his powerful punching combinations and putting Fury on the mat again, but this time for a 10-count.

When will the Fight End? (Rounds)

These odds dictate that fight will most likely go the distance again. Oddsmakers must believe that Fury will focus more on defensive stances and keeping Wilder at bay. Wilder seems to be poised to deliver a knockout blow, so it sets up to be an entertaining clash of styles. The next best odds indicate that if it doesn’t go the distance, it’ll be stopped between rounds four and nine.

This prop bet suggests that if Wilder wins, it’ll be by a knockout, and if Fury wins, it’ll be by a decision. Once again, this fight has a high likelihood of being a power versus defense style of boxing matchup. A wager of $100 on Tyson Fury winning by knockout will earn a payout of $450.

The next three prop bets imply that the fight will not go the distance and that Wilder will be the only boxer to score a knockdown. Since the odds are so weak that Fury will win by a non-decision, the odds point to a Wilder knockout victory on Saturday night.

Betting on the big fight can create for a lot of excitement, so be sure to use a recommended sportsbook when you are shopping betting lines.

Will Fight go the Distance?

Will Deontay Wilder Score a Knockdown?

Will Tyson Fury Score a Knockdown?

Deontay Wilder to be Knocked Down and Win

Tyson Fury to be Knocked Down and Win