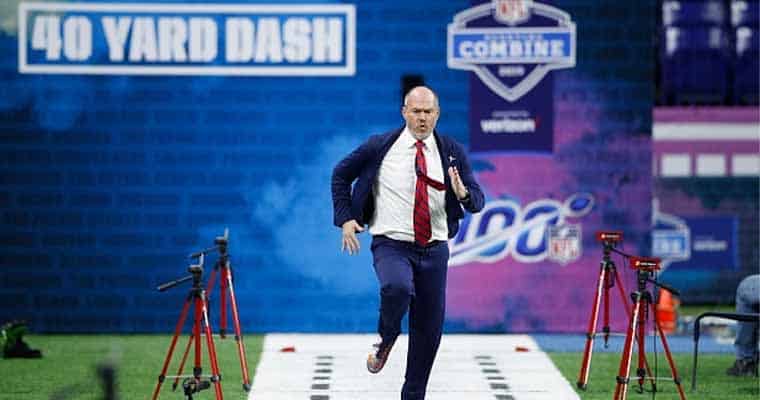 Each February, after the echoes of the Super Bowl have died down and the college football bowl season has concluded, the nation’s top NFL hopefuls gather in Indianapolis to display their skills to NFL scouts.

The combine is televised, but let’s face it, this event is only for NFL junkies. Normal people just read through the results or just watch a highlights package to find out the results. MyBookie has posted betting lines on the NFL combine in a variety of categories. Your bets on the Super Bowl have already cashed in, but betting on the NFL doesn’t have to end there. Now you can place some wagers on the NFL combine for betting action that will last for days.

Keep in mind that wagers must be placed on these odds no later than the cutoff of February 27th at 4:00 PM. Here are some of the betting lines that have captured our football betting interest so far.

Some still claim that Deion Sanders posted the fastest 40 time in the history of the NFL combine with a 4.21, but that came before digital clocks were used to keep the official time. Back in 1989, scouts relied on their own handheld stopwatches to evaluate talent, and many have different times recorded for Sanders’ 40-yard dash.

The NFL instituted official digitally timed 40-yard dash results in 1999, and since that time, the fastest time that has been recorded was John Ross’ 4.22 seconds in 2017. This time slightly edged out Chris Johnson’s (CJ2K) previous record of 4.24 seconds from 2008.

Ross was drafted to the Cincinnati Bengals in 2017 and has yet to make a significant splash as a wide receiver. Speed is essential, but it isn’t the only skill that matters, which is why all of the measurements observed during the combine are so important.

In 2001, Kevin Kasper set the 20-yard shuttle drill time record at 3.73 seconds. Kevin bounced around the NFL for a few years and had some success as a kick returner but was unable to stick with a team for more than one season.

The 20-yard shuttle drill measures quickness and the ability to change direction repeatedly. Wide receivers and defensive backs tend to rank at the top of this drill, but it is an important skill when evaluating the athletic prowess of any football player.

Jordan Thomas, a defensive back from the University of Oklahoma, recorded the fastest 3-cone drill in the history of the NFL combine when he posted a time of 6.28 seconds in 2018. The time posted was considerably faster than the previous record of 6.42 seconds, which was set by Jeff Maehl in 2011.

Despite posting such an impressive time in this drill, Jordan did not get drafted by any teams in 2018. He signed a free-agent contract with the Philadelphia Eagles but was eventually cut. His scenario once again proves that the combine’s purpose is to get a complete scope of the athlete’s ability. No one drill can paint the entire picture of a player’s potential.

There have only been nine instances of a combine participant posting a time of 4.29 seconds or higher in the 20 years since the official clock has been implemented. That sounds like less than 50% odds that someone will best that time during 2020’s combine, but the betting line of -160 suggests that the implied odds are that there is a 64% chance of someone posting a time higher than 4.29 seconds.

A closer look at the fastest times posted in the history of the combine reveals that all but one of the nine occurrences of sub 4.29 second 40-yard dash times have been since 2010, with the lone exception being Chris Johnson in 2008. The players are getting faster, and the odds suggest this as well.

Wide receiver Shelton Gibson posted the fastest 60-yard shuttle time during the 2017 combine. His record time of 10.71 seconds was just one-tenth of second faster than the next-best time which was posted by wide receiver Brandon Cooks in 2014. There have been only seven times posted in this drill that is faster than the 10.81-second betting line, so we’re suggesting betting on slower, which will require a $300 wager to earn a $100 payout.

You can’t coach height, but you can make up for lack of it by jumping really high. The highest vertical jump ever recorded at the NFL scouting combine is 46”, which was achieved in 2005 by defensive back Gerald Sensabaugh. Sensabaugh went on to play eight years in the NFL and used his leaping ability to record 14 interceptions over that time.

There have been only ten jumps that have exceeded 43.5 inches in the last 20 years, but it has happened four times over the past five years. Does that mean we are due for another massive leap in 2020, or do the odds suggest that it’ll be a while before we see another?

Defensive back Byron Jones jumped further than anyone ever has at the NFL combine when his broad jump measured in at 12’3”. The next best length is a full six inches shorter and is shared by three players. Jones has enjoyed a solid career so far with the Cowboys and was selected to the Pro Bowl in 2018.

Will a prospect jump for further than 11’5″ during this year’s combine? The odds are dead even for both outcomes, and a wager of $120 will be required to earn a payout of $100 no matter which choice you make. It has only happened eight times before, but all of those occurred within the last five years. Bet on longer.

To find the record for most bench presses at the combine, you’ll have to travel back to 1999 when defensive tackle Justin Ernest set the mark at 51 reps of 225 lbs. Smash Mouth’s All Star and Ricky Martin’s Livin’ La Vida Loca polluted radio airwaves. Movie audiences were just being introduced to The Matrix.

The most recent threat to match or beat the record was in 2011 when Stephen Paea put up 49 reps in 2011. Incidentally, Justin Ernest never played a snap in the NFL.

Rich Eisen is the lead announcer for the NFL Network and has run the 40-yard dash at the NFL combine in a suit and tie every year since 2005. His record time is 5.94 seconds, which he set in 2015. The 40-yard dash in a suit is all a part of Run Rich Run, Eisen’s effort to raise awareness for his charity, St. Jude’s Children’s Hospital. So far, he has raised over $1 million.