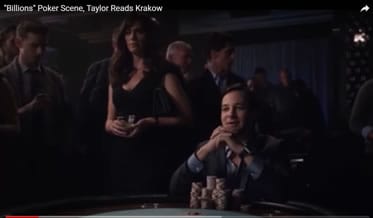 Poker is as much a game of skill as it is a game of luck. A player’s confidence (or feigned confidence) can influence a match as much as a strong hand. Showtime’s “Billions” showcased this in a recent episode of the show’s sophomore season, which featured characters at a charity poker tournament.

In the episode, main character Bobby “Axe” Axelrod (played by actor Damian Lewis) decides to participate in a charity poker tournament, where he invites Taylor (played by actress Asia Kate Dillon) to be on his team. This unusual pick has many, including Axe’s other constituents, wondering what he’s up to. Axe’s motive centers around beating enemy Todd Krakow (played by Danny Strong). Once the tournament begins, Axe loses to Krakow, leaving Taylor the only remaining player on Axe’s team. In a high-stakes hand, Taylor decides to call Krakow’s bluff, citing his arrogance and bullying tactics before calling him. She even has the audacity to predict what hand he has—and ends up being right. Krakow is floored, losing the hand and the tournament.

This scene is a callback to another scene from the movie “Rounders”, which is also written by “Billions” co-creators Brian Koppelman and David Levien, where Matt Damon’s character calls John Malkovich’s character’s bluff in a high stakes game. Damon’s character is able to pinpoint his opponent’s tell, giving him the confidence to call his opponent’s bluff and win the game. In the game, Teddy lays down top two pair and reveals them to Malkovich’s character, and ends up playing into his opponent’s temper to corner him into playing foolishly. Bluffing affects the psyche of both players in the game and can elicit emotional reactions. However, as Taylor and Matt Damon’s characters both show, emotions are best left out of the poker room and kept in check, otherwise you’ll find yourself swept up before you know it.

These two examples callback to a real-life scenario that happened between poker stars Phil Ivey and Paul Jackson. The duo were playing in a Monte Carlo tournament with a $25,000 buy-in and a $1 million dollar prize for winning. Both players had nothing—Ivey sporting a Q-8 and Jackson a 6-5. The flop gave them a J-J-7. Neither player had a suit advantage, so they both began bluffing like their lives depended on it. In what is considered to be one of the most exciting poker exchanges to date, Ivey and Jackson go back and forth, re-raising the pot each time. Finally, Ivey decides to go all-in, knowing that he has absolutely nothing. He was banking on Jackson also having nothing and folding earlier. Ivey’s strategy paid off, as Jackson eventually folds after Ivey’s ambitious race, giving Ivey the pot and the bragging rights of outwitting his opponent. This hand clearly outlines the mental aspect of the game, where no matter what’s in your hand, your body language can determine the momentum of a match.

Video Of The Billions Poker Scene