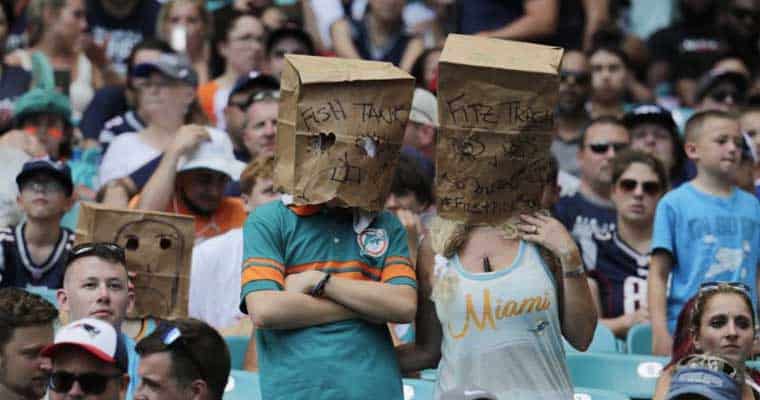 “There are good teams, and there are bad teams. Then there’s 50 feet of crap. And then there’s the Miami Dolphins” is likely what Billy Beane would say if he was the general manager of the NFL team with the worst odds to win the Super Bowl.

You could argue that the little fishies (I know they’re actually mammals, but roll with it) are already dead in the water after the Baltimore Ravens feasted on them 59-10 in Week 1 and after the New England Patriots annihilated them 43-0 last Sunday.

And while Fins were 7-point underdogs against the Ravens and an 18-point underdog to the Pats, this week the team’s point spread is close to making history.

For Sunday’s Week 3 matchup on the road against the Dallas Cowboys, the Dolphins are a massive 22-point ‘dog down in Jerry World.

To put in perspective just how historically bad that spread is, you’d have to go back to 1987, which saw Joe Montana’s San Francisco 49ers were a 23-point favorite over the Atlanta Falcons—which remains the largest point spread during the Super Bowl Era.

But at least the dirty birds had an excuse: 1987 was a strike year, which means the team was essentially filled with replacement players they picked up off the street.

The result of that game? A respectable 25-17 defeat, but hey, at least the Falcons covered.

However, will the Dolphins cover this weekend?

Well, let’s just say I wouldn’t bet on anything other than the Cowboys cooking some fish over an open campfire down in Texas after all is said and done.

Below are all the point spreads and totals found at BetOnline for Week 3 of the 2019 NFL regular season, as well as game information for each matchup.

And if you’re interested in learning how to bet on professional football or want to know more about the legality of online wagering on America’s most popular sports league, then check out our guide for Legal NFL Betting.