Skip to content
HomeNews2019 NFL Draft Odds: Why you should bet on Kyler Murray to go 1st overall to the Cardinals 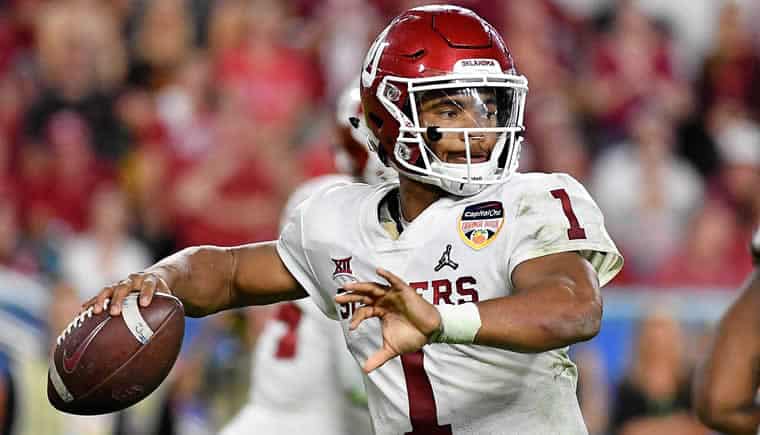 It’s safe to say that Kyler Murray has had quite a year.

And it’s gonna get even better when he’s selected by the Arizona Cardinals with the 1st overall pick on Thursday night at the 2019 NFL Draft.

In the past year, Murray has been selected 9th overall by the Athletics in the 2018 MLB Draft last June, won the Heisman Trophy as the Oklahoma Sooners quarterback, led his team to a CFP semifinals appearance, and decided to enter the NFL draft.

With all signs — and betting odds — now pointing toward him becoming the second Oklahoma QB going No.1 in as many years, the question must be asked:

Should you bet on Murray going No.1 overall?

Absolutely, and here’s why.

Who will be drafted 1st overall in the 2019 NFL Draft?

First off: There are no safe bets.

There are bets with either high probability or low probability, but nothing is certain.

And a good bet is one where you think the sportsbook has undervalued odds on the betting line.

This is one such example.

On the surface, that doesn’t seem like it has good value, and I would normally agree.

When converting Murray’s odds to an implied probability, we see that he’s been given a 77.76% chance to go first, according to the sportsbook.

Here are formulas, so you can check and see if my math checks out:

Then just multiply the decimal answer by 100 to see the percentage.

However, we still need to take out the juice in the betting line since when you add together the combined odds from Murray, Nick Bosa, and the field, you get 110.26% and my 1st grade math teacher told me it’s impossible to go over 100% (however, I always give 110%).

After dividing each players’ implied probability into the sum of all three, and multiplying by 100 again, we now get the true probability given by the oddsmakers.

So with the current betting line, the oddsmakers are telling me that at -350, Murray has a roughly 70% chance to be selected by the Cardinals with the top pick.

One could argue that the Cardinals don’t need to take Murray because the team drafted Josh Rosen at quarterback with the 10th overall pick last year.

So much so that the Cardinals offense finished dead last in the National Football League for total offensive yards (3865) and points scored per game (14.1).

Those gaudy stats do not inspire a ton of confidence, and when you consider that the team has a chance to pick wipe the slate clean after just one season and get a dual-threat quarterback that would be perfect for Kingsbury’s system, it becomes very unlikely the team will pass on Murray.

And not to mention: It doesn’t look like the Cleveland Browns regret taking Baker Mayfield — the Heisman-winning QB that Murray replaced as a starter at Oklahoma —  first overall last year.

They went from 0 wins to 7 wins in one season, and are making a serious push to become a Super Bowl contender.

That ain’t happenin’ for the Cards with Rosen — and you can bet on it.

If the team keeps Rosen then they’ll never win more than 5 games in any season over the next 5 years and will settle on another quarterback in the 5-10 pick range that will likely also be mediocre at best.

Murray is a gifted athlete that at-worst will be mediocre and sell a bunch of tickets because he’s entertaining to watch. At best, he could turn the Cards into Super Bowl contenders within the next 5 years.

All of this aside, ESPN’s NFL Draft analyst Mel Kiper Jr. said yesterday that there is a “99.9%” chance that Murray gets drafted by the Cardinals and Todd McShay echoed those sentiments based on what his sources have been telling him.

And let’s say there’s actually a 90% chance the Cardinals takes Murray, that means at 70% true probability, you’re getting a whopping 20% edge on the favorite.

There is a rumor currently making the rounds that the Cardinals won’t select Murray 1st overall, but these reports have absolutely no source and have appeared out of fat air — likely just to stir the pot and get clicks.

As stated before: There are no safe bets.

And with that being said: Murray (-350) to the Cards at No.1 is about as safe as you’re ever gonna see at an online sportsbook.