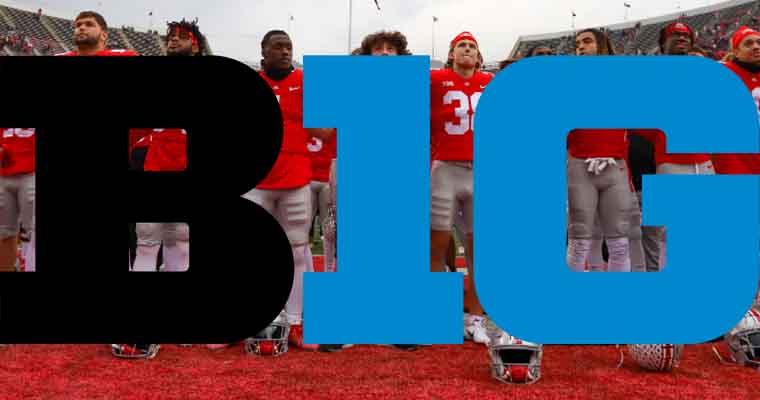 Week 1 of the 2022-23 College Football season begins tonight, with most programs playing their first games over the next three days.

Once again, college football betting sites are projecting that the SEC will take up two of the four spots in this year’s CFP. The Big Ten is also taking up one of the top four spots in the current NCAAF futures, suggesting that the conference champion will hold enough standing in the committee’s eyes to make the CFP.

Last year, the Michigan Wolverines were able to win the Big Ten and qualify for the College Football Playoffs for the first time ever under head coach Jim Harbaugh.

This year the Wolverines trail the Ohio State Buckeyes, who are expected to win the Big Ten and earn a chance at winning a National Championship.

One issue with the Big Ten in the current year is that the meat of the conference is contained within the East Division. Ohio State, Michigan, the Penn State Nittany Lions, and Michigan State Spartans are all arguably better than the Wisconsin Badgers, the team projected to win the Western Division at online football sportsbooks.

This scenario often results in a lackluster Big Ten Championship Game where the winner of the East is usually heavily favored to win.

The Wisconsin Badgers hold a sizable lead in the West Division odds to win for 2022, but do they have a shot at beating one of the top four teams in the East?

Have a look at what CFP Championship betting sites think in regards to how each Big Ten team will fare come season’s end.

The projected winner of the Big Ten West (Wisconsin) is ranked fourth overall in the CFP odds to win this year’s NCAAF National Championship.

Ohio State’s season gets started with a bang this Saturday as they will face the 5th-ranked Notre Dame Fighting Irish. The Buckeyes are favored to win by 17 at home, but ND could surprise with their new head coach, Marcus Freeman, calling the shots.

According to the above Notre Dame vs. Ohio State betting line, the Buckeyes should win by a final score of 38-21. Place your bets now if you want to lock in the above Ohio State odds, or you can partake in live betting that will allow for wagers to be placed during the game at any of our recommended sportsbooks.