Skip to content
HomeNews2022 College Football Betting: Who Will Win The ACC? 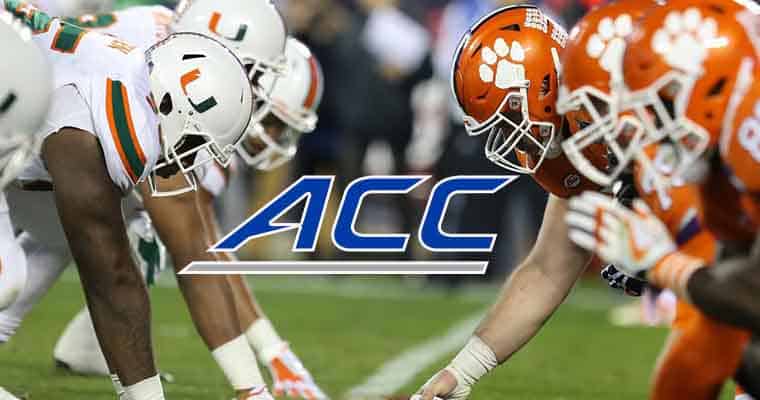 The Atlantic Coast Conference, up until recently, has been one of the top groupings of college football programs in the nation. Prior to last season, the Clemson Tigers had made it to the College Football Playoffs six times in a row.

Last year, the Cincinnati Bearcats of Conference USA took up the spot that was normally occupied by an ACC team. The Conference was won by the Wake Forest Deamon Deacons, but with three losses, they did not qualify as a final four CFP team.

This Saturday, the NCAAF season begins with a slate of Week 0 games. Futures odds for college football betting are on the boards that are taking action on the winner of the ACC in 2022, with four teams ranked in the preseason top 25.

The Tigers feature moneyline odds that are listed in the negative, a full 480 points ahead of the second-ranked team, the Miami Hurricanes. Football betting sites have also posted futures odds for the Atlantic and Coastal Divisions of the ACC.

The Tigers appear to be once again head and shoulders above the remainder of not only the Atlantic Division but the entire ACC. Barring any surprise resurgence from the Florida State Seminoles, it should be clear sailing for the Tigers to reach the ACC title game.

The Coastal Division appears to be a 3-dog race between UM, the Pittsburgh Panthers, and the North Carolina Tarheels. The Hurricanes and Tigers are the most likely teams to make it to the ACC Championship Game on December 2nd at Bank of America Stadium in Charlotte, North Carolina.

There is some variance in the ACC futures when shopping the lines at the sites included in our offshore sportsbook reviews, but the rankings are the same. Still, we suggest that readers become members with multiple sportsbooks if they are not already so that they do not get trapped into betting on one set of odds on a given team or game.

If the odds play out as suggested above, then Clemson will have a legitimate shot at earning a trip back to the CFP and the end of the season. Current College Football Playoff futures have the Tigers ranked fourth.

The above CFP odds project a potential first-round CFP game between the Alabama Crimson Tide and Clemson. Frequent playoff qualifiers, the Ohio State Buckeyes and Georgia Bulldogs are the odds-on favorites to face off in the other CFP semifinal game.

Clemson’s moneyline odds to win the National Championship are alarmingly high at +1000. Betting on the Clemson Tigers to win the CFP will earn 10-to-1 payouts if wagers are placed right now.

The NCAAF futures odds for lower-ranked teams only get longer from there, so if you’ve got an eye on a CFP sleeper, place a bet immediately!