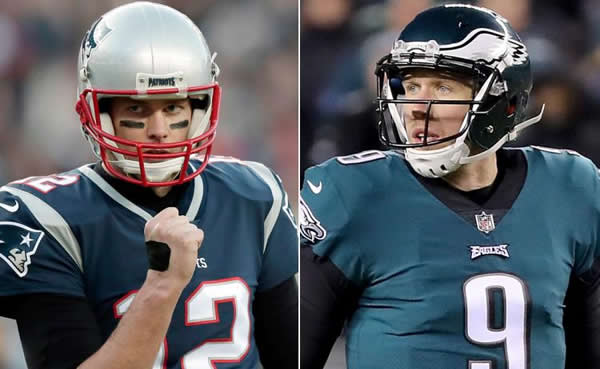 Super Bowl 52 features 2 very different quarterbacks. On the one hand, you have Tom Brady, a 40-year-old looking at the Hall of Fame and a status as arguably the greatest to ever play in that position. On the other, you have Nick Foles, a hopeful prospect-turned-backup that has moved through the league over the course of his career. This game has the chance of changing these 2 QB’s careers for better, and in other ways, or worse. Legal Super Bowl betting lines have these 2 as the highest chances of winning Super Bowl MVP on their respective teams, but it will take a win to get them there.

Brady has enjoyed quite the successful career with New England. He has won 5 Super Bowls, been to the Super Bowl 7 times and is heading to his 8th championship. He’s won 8 AFC Championships, numerous division titles and MVP awards as well. Like a fine wine, he seems to only improve with age. At 40, he led the entire league in passing yards. No quarterback has ever led the league in passing yards and gone on to win the Super Bowl. Brady could very well be the first. He would also cement his legacy with a 6th ring and 28th Playoff victory under coach Bill Belichick.

He has pulled off incredible comebacks against all odds. He made it through a 4-game suspension after the Deflategate incident and maintains his innocence. In fact, he went on to win a Super Bowl in the same season he served his suspension. People expect him to retire after this and he seems to think he can keep going. The way he is playing, why not? His pocket presence is strong and Brady can put the ball anywhere. He’s worked with many different players over the years. This type of experience, with mainly the same coaching staff, is unparalleled by any other player in the league right now.

Foles has had a shaky NFL career with flashes of brilliance and multiple low points. He was drafted by the Eagles as an understudy to Michael Vick, then became the starter. He helped get the Eagles to the Playoffs, but was ultimately traded to the St. Louis Rams. There, he also had hot and cold streaks and eventually lost his starting job. The team ended up drafting a rookie QB to take his place, forcing his hand in requesting to be let go. The Chiefs picked him up and he played under Alex Smith for a season, but wasn’t picked up for a second.

Philadelphia took another chance on Foles and it has worked out for them. Again, he played second fiddle to promising sophomore QB Carson Wentz, but when tipped to come in after Wentz’ injury, he stepped up. Foles has shown he has what it takes and is coming off a remarkable performance against the Minnesota Vikings. If he wins, he will match Brady as being the only other backup QB to take his team to a Super Bowl victory.

If you are into football betting, specifically with props, betting on either of these guys to win MVP is a solid wager. A win for Brady would strengthen his case of being the best of all time. A win for Foles would finally see him get the recognition he deserves. It may even land him a starting job somewhere if he wants to leave. Tune in Sunday to see who goes home happy.