Skip to content
HomeNewsArgentina Survives And Advances To Round Of 16 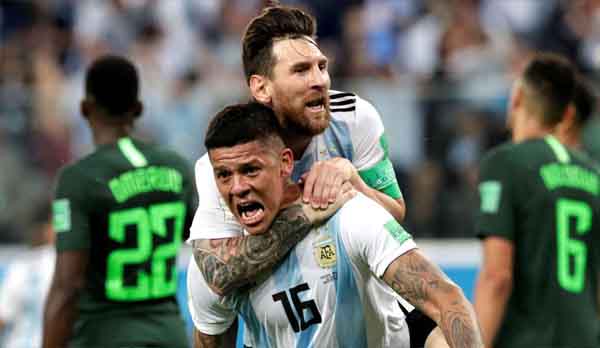 Argentina pulled it off. For a team that looked to be in shambles and defeated, Argentina somehow mustered the perseverance to get a win over Nigeria and qualify for the World Cup’s Round of 16. There may have been a bit of luck involved, but Argentina fans are not complaining.

In order for Argentina to advance to the next round, they needed a win over Nigeria and Iceland to lose against Croatia. Nigeria was coming off a strong 2-0 win over Iceland while Argentina was attempting to fight back from a 0-3 thrashing courtesy of Croatia. According to reports, Argentina’s locker room was in total disarray after the loss and fingers were being pointed every which way. Star player Lionel Messi looked crushed and it was rumored that players were engaging in a munity towards the manager.

Tabloids can say what they want because at the end of the day it is how you play that matters. At the start of the game, Argentina’s urgency was evident and Lionel Messi quickly scores a goal to put Argentina in front. It was the 100th goal of the 2018 World Cup. The goal put some momentum on the Argentinian side, which is good considering they have never been knocked out of the Group Stage in the country’s history. Nigeria’s defense held out and the first half finished 1-0.

Nigeria subbed in Odion Ighalo at striker to start the second round. Argentina quickly gave up a penalty amidst a strong Nigerian attack. Victor Moses converted from the spot and put Argentina back into a vulnerable position. The remainder of the second half was sluggish for Argentina and their hopes seemed to be vanishing fast. Subs were made, including bringing forward Sergio Aguero on in the 80th minute—it was going to be an all-out attack for Argentina.

Pressure started to build on the Nigerian defense and that pressure finally opened up an opportunity. A whipping cross came in from the left side and defender Marcos Rojo was there to rifle it in off the volley. It was a magnificent goal and sent the stadium into a frenzy. Argentina’s time wasting in stoppage team prevented Nigeria from fielding a proper attack until the dying seconds, though the potentially lethal cross was picked out by the keeper.

While all this was happening, Croatia and Iceland were having a battle of their own. Croatia fielded a B-team in order to give their stars a rest since they already locked their spot in the Round of 16. This helped Iceland’s odds of winning. Croatia got on the board first in the second half but Iceland quickly answered through a penalty kick. It looked as if Iceland might have been able to pull off a draw but Croatia’s Ivan Perisic scored in the 90th minute to shatter their World Cup aspirations.

With these victories, Croatia won the group and Argentina managed to sneak into second place and qualify. Iceland wasn’t as strong as they were in the 2016 Euros, but they still put up a valiant effort. Nigeria played exceptionally well for a young team and will soon be a powerhouse in international soccer. Whether Argentina or Croatia will make it out of the Round of 16 remains to be seen, but you have to appreciate both sides’ efforts in advancing to the next stage.