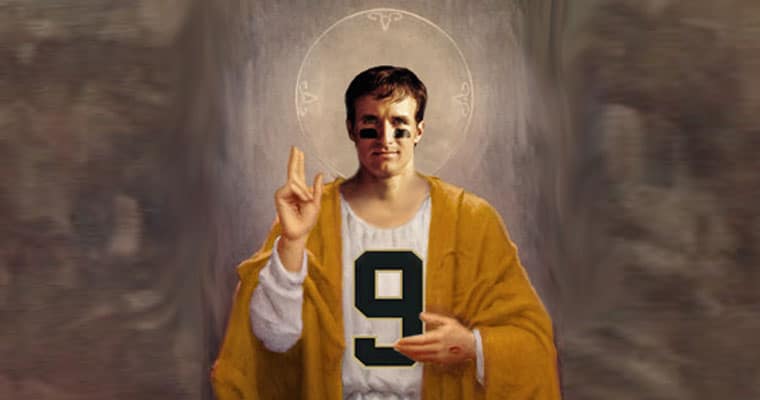 Breesus suffered after a thumb injury and descended to the sidelines.

But on the fifth week, he rose again and ascended the New Orleans Saints chances of winning the Super Bowl this season—restoring hope to the Who Dat Nation and rewarding the betting faithful.

And so, let it be written.

After the referees from last year’s NFC title broke one of the Ten Commandments by robbing the Saints of a trip to the Super Bowl—which some have said is the worst missed call in NFL history—some sportsbooks even refunded bets on the matchup, and the league has since changed the rules to allow for a review of pass interference calls.

Drew Brees and the Saints had hoped to earn at least some redemption when they marched in to face the Los Angeles Rams on the road during Week 2 of the 2019 NFL regular season.

However, on the second drive of the rematch, the future first-ballot Hall of Fame quarterback suffered an injury to his thumb on his right (throwing) hand. The Saints would go on to lose the rematch 27-9 and leave La La Land with a 1-1 overall record.

Prior to the injury, the Super Bowl 54 betting odds for the Saints were promising, with the Bovada Sportsbook oddsmakers placing them third overall at +800 odds (11.11% chance).

However, when it was reported that Brees would miss at least five weeks after he underwent surgery on his thumb, the Saints plummeted to +1600 odds (5.88% chance) and even worse at many of the most popular NFL betting sites.

But despite losing one of the NFL’s all-time greatest quarterbacks for over a month, head coaching genius Sean Payton displayed why he’s one of the best in the business after preparing backup Teddy Bridge-“Over Troubled”-water for battle, week in and week out.

Bridgewater performed exceptionally well after filling in for the injured Brees, throwing for 1,370 yards, nine touchdowns, only two interceptions, and completed 67.7% of his passes.

But more importantly: In his five starts, the Saints went a perfect 5-0.

Perhaps most importantly: Bridgewater covered the point spread in all five games. And as we all know: Good quarterbacks win, great quarterbacks cover. The Saints also rose back up the board, jumping to second place at +600 odds (14.29% chance).

And this past Sunday, Breesus returned to the lineup, and after showing a little bit of rust with an early second-half interception, he managed to return to form before our very eyes.

The Saints legend led an aerial assault with his new thumb, completing 34 of the 43 passes he attempted, throwing for 373 total yards, and adding three touchdowns in a 31-9 home victory over the Arizona Cardinals.

Now, with a 7-1 overall record, the Saints head into their Week 9 bye to get some well-deserved rest.

And after witnessing Brees in a single game, the oddsmakers lifted the Saints’ Super Bowl 54 betting odds to the highest they’ve been: +500 odds (16.67% chance).

Currently, only the defending Super Bowl champion New England Patriots are higher with +220 odds (31.25% chance), but everyone by now knows that Bill Belichick and Tom Brady made a blood pact with the Devil in order to achieve their level of success spanning across two decades.

But if you’re looking for a team to show us the light at the end of the Patriots dark dynasty tunnel, then let Bressus show us the way.

Because with the Savior’s return, the Saints just might be the best bet for the NFL to find salvation and deliver us from the Patriots’ evil. Amen.