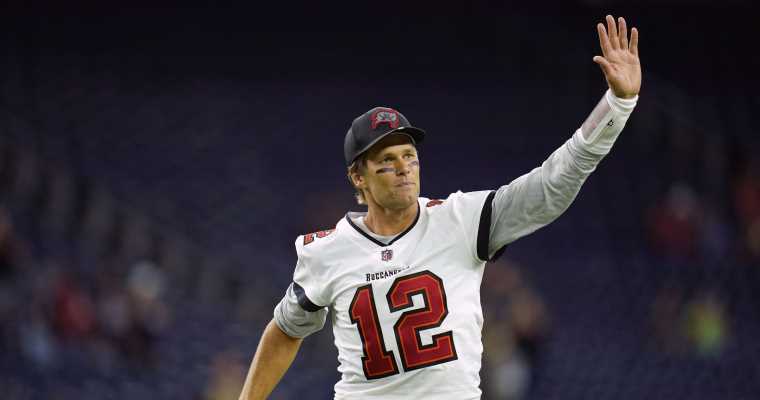 With a 22-year career and just about every possible NFL record under his belt, the GOAT is off to greener pastures.

However, that doesn’t mean he’s off the betting boards. In fact, we expect there to be a host of Tom Brady unretirement odds posted in the coming weeks and months.

But even today – in the immediate aftermath of Brady’s announcement – there are several betting lines that derive directly from his decision. Here are a few of the most obvious ones (via Bovada Sportsbook):

No way. We really never got the impression that Brady had any desire to coach in the NFL, and we’d be very surprised to see him ever take on such a job.

There’s no chance Rob Gronkowski plays another snap in the NFL. And this way, he and Brady can be inducted into the NFL Hall of Fame together.

As goes Brady, so goes The Gronk.

Bruce Arians – like Bill Belichick – is nothing without Tom Brady, but the old curmudgeon isn’t likely to kick a man while he’s down. Arians will stick around with the Bucs for at least another season.

Okay, this one isn’t totally related to Brady, but over the weekend when Brady’s retirement plans first leaked, there was some speculation that the GOAT could make the trek west to play for the San Francisco 49ers.

Given that Brady is from San Mateo, CA, and rooted for the Niners throughout his youth, the “homecoming” made sense.

It also had the undertones of a great revenge tale, as Jimmy Garoppolo was a source of considerable friction years ago in New England and is considered to be one of the biggest reasons behind Brady’s eventual falling out with head coach Bill Belichick.

Brady sniping Garoppolo’s job in the bay – and then winning another Super Bowl – would be so much schadenfreude-style icing on the cake. And Brady is well known to cut like a knife.

Of course, we’re anything but against pipedreams here at LegalBettingOnline, which is why we’ve put together some hypothetical Tom Brady odds to get you through these harrowing times of fear, uncertainty, and doubt.

Sure, the NFL and the betting boards will never be the same, but that doesn’t mean you can’t still have a bit of fun.

Will Tom Brady and Gisele Bundchen be divorced before 2024?

Many fans allegedly blame Brady’s wife, supermodel Gisele Bundchen, for forcing him into “early” retirement. At 44 years old. We think that’s baloney, but it’s obvious the two want to spend more time together.

However, those plans could backfire bigtime.

Brady seems like a pretty storybook husband and father, but his family’s about to see a side of the guy he’s never shown to anybody. Not even himself.

Gisele might get sick of it in short order.

Will Tom Brady start a craft brewing company before 2023?

Aside from owning every NFL accolade and more Super Bowl titles than any NFL franchise, Brady is also well-known for the way he downs a glass of beer:

Of course, he’s also a health nut, so he probably isn’t going to pair his supplement company with a brewery.

Will Tom Brady unretire from the NFL before 2027?

If Brady misses the game enough during the next year or two, he’ll probably be in good enough shape that he could come in as a late-season mercenary and carry a contender to an NFL title.

There’s some precedent for this tack throughout the league’s history, albeit Brady doesn’t seem like the type to want something without earning every inch of it.

If Brady stays out of the NFL for the next five years, he’ll be in the Hall and have that final closure.

No, and neither will anyone else.

Spring football will never be a thing for more than a single season once every couple of decades, and Brady’s not getting involved in that nonsense.

Nah. Drew Brees is a likeable guy, and Brady already took everything else away from him, besides.

Nah. Romo’s a likeable guy, and he never had anything Brady wanted in the first place.

Could Tom Brady take either of those scrubs’ jobs if he wanted to?

Will Tom Brady be a first ballot NFL Hall of Fame selection?

This seems like a lock, doesn’t it? But we recommend taking the over.

A minimum wager here gets you all the money in the world, and there’s still five years where all kinds of “dirt” could come out about Brady to sour the spineless press corps that votes on this thing.

For example, what happens when everyone finds out that Brady wasn’t particularly enthusiastic about the COVID vaccine and bucked NFL COVID protocols by not wearing three masks while hanging out less than six feet from his wife and children at various times during the last two years?

Does Tom Brady need the money?

Need? No. But he’s going to get it anyway.

Between his NFL salaries, endorsements, and crypto hodlings, Brady’s already quite clearly a billionaire.

Once upon a time, Brady told ESPN in an interview that becoming a US Senator was one of his “craziest ambitions.” Now, all the political rags are trying to cash in on Brady retirement clicks with bunk like this.

While Brady could probably easily win election to the US Senate depending on the state he chooses to represent, there’s no reason for him to get involved in something quite so vitriolic and divisive.

Brady knows better than to alienate half his fanbase, even if his political odds were sure to be overwhelmingly favorable.

Will Tom Brady run for any elected office in 2024?

The odds are the same because it’s Senate or nothing…

Will Tom Brady announce a Presidential run by 2036?

But regardless, this is a trick. No matter how you bet on this one, your legal online sportsbook will have your money locked up for the next decade and a half.

Luckily, the top-rated venues we recommend don’t offer scam lines like this, and if you ever see similar being posted on at a “real” sports betting site, you know the operation isn’t legit.

Brady has actual NFTs of himself, so we think he’ll probably go for it.

Will Tom Brady be hired as an NFL analyst in 2022 (any network)?

The networks want him and are already reaching out to his agent. But there seems very little chance that Brady actually wants them.

Maybe one day Brady will do some color commentary on a TV broadcast while holding a pen in his hand and gesticulating wildly at the camera as if he’s right in the middle of taking some important notes for some reason, but it won’t be any time soon.

This is a tough one.

The “cheapest” NFL team is the Buffalo Bills with a current valuation of $2.27 billion, and the Cincinnati Bengals are right in front of them at $2.275 billion.

While Mr. and Mrs. Thomas Edward Patrick Brady, Jr., could probably pool their assets and buy a majority stake in some such club (but maybe not the Bills or Bengals specifically, as both teams have young franchise QBs who could make them worth twice as much in the next five years, a la Brady and the Patriots), the ROI might not be all that compelling.

Plus, we really don’t want to have our money locked up for quite that long.